Auctioneers and valuers group believes there will be 17,000 fewer homes this year due to Covid 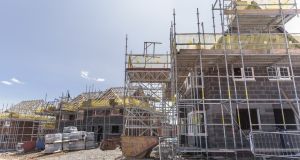 Last week it emerged AIB had issued a de facto ban on mortgages for anyone who has been in receipt of the wage subsidy scheme. Photograph: Getty Images

“Over-zealous lending restrictions” by banks will halt the pick-up in house building, the Institute of Professional Auctioneers and Valuers (IPAV) has warned.

“While no one expects lenders to engage in irresponsible lending, if lending to those on State Covid-19 payments who have jobs to return to are stopped or severely delayed from getting mortgages it is likely to have a devastating impact on the supply of new homes, which are already behind schedule as a result of the pandemic,” chief executive Pat Davitt said.

His comments come amid reports lenders here have tightened their already onerous mortgage lending rules, making it yet more difficult for customers to secure a loan to buy a home.

Last week it emerged AIB had issued a de facto ban on mortgages for anyone who has been in receipt of the wage subsidy scheme. The State-owned lender has since promised to treat each application on a case-by-case basis.

Nonetheless, IPAV warned imposing tougher lending criteria on home buyers would damage confidence among builders and cause house building to slow to a trickle.

The organisation believes there will be 17,000 fewer homes built this year as a result of the pandemic.“Supply is already negatively impacted by the pandemic and trying to recover,” Mr Davitt said.

The Central Bank said last week it expected 30,000 fewer homes to be built over the next three years.

Mr Davitt also highlighted what he described as a patronising attitude towards prospective first-time buyers. “The current narrative seems to be that aspiring buyers need to be protected from borrowing,” he said.

“In our experience, young aspiring buyers are responsible and will of themselves not want to take on debt if they don’t have the confidence that they will have the capacity to repay their mortgages. They and their parents have learned from the last financial crash when they were encouraged to believe there was no end in sight to rising property prices.”

Mr Davitt noted that in 2007 borrowers were able to negotiate 100 per cent mortgages with higher interest rates than today, and could borrow at up to seven times their incomes on properties that were 40 per cent higher than today.

“Today we have 70 per cent to 90 per cent mortgages, a three and a half times loan-to-income limit on borrowing, cheaper property prices and interest rates, and at least 300,000 too few properties,” he said.

1 ‘Saudi Arabia is where the opportunities will happen in future’
2 Wirecard was looted before collapse, German prosecutors suspect
3 Accidental engineer morphs into a top executive at Microsoft
4 Two men face fraud charges over £1.2bn sale of Nama’s NI loans
5 Creative thinking from inside the box
6 He’s almost 82 but Larry Goodman has plenty of moves left
7 High time: Netherlands moves to clean up absurd cannabis policy
8 Wifi problems? Quick tips to get your home internet out of the slow lane
9 Government U-turn on excluding business owners from wage subsidy
10 European Commission to press ahead with tax clampdown after Apple ruling
Real news has value SUBSCRIBE