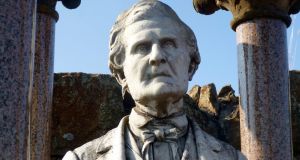 The Rob Roy was perhaps one of the most unfortunate ships to ever cross the Atlantic. Having left Belfast 25 days earlier, disaster struck the vessel when it was a mere 64km from its final destination, the port of Quebec. Moored in the St Lawrence River, the captain had welcomed aboard a local pilot to guide them through the shallows to the docks, but he proved a poor choice.

As night descended and the passengers slept, the brig suddenly ran aground at a rocky outcrop known locally as L’Islet. Isolated and without any hopes of rescue, 24 lives were tragically lost, the majority emigrants from Ulster hoping for a better life in North America.

Among the dead were the sister-in-law and niece of David Herbison, a Ballymena native who was also aboard that day. He and his elder brother almost shared the same fate, when the small boat they tried to make it to safety in was nearly dashed against the rocks. Luckily, two local farmers waded into the river to pull the small craft to shore, saving their lives. Many more made it to dry land, but had lost family and friends and most, if not all, of their worldly possessions.

Herbison’s time as an emigrant was difficult and short lived. Though he found the land breathtakingly beautiful, he struggled to adapt to life in Canada, and within a matter of weeks decided to return to his native Dunclung, just outside Ballymena. The loneliness he felt is well expressed in his poem, ‘Lines to a Shamrock, A Song of Exile’:

I am a stranger here, I have not seen
One friendly face of all that I have known,

And my heart mourns for thee my island green,
Because I am a stranger and alone

His early life was no easier than his passage to North America. Born in 1800, at the age of three he had lost his sight after contracting smallpox, and only regained vision in one eye some years later. As a result, his education suffered and he only attended school for a brief period. He had left by 14, and became an apprentice linen weaver, quickly proving adapt at operating a hand loom.

He grew up immersed in the rich Ulster Scots oral tradition of the region, and developed a love of poetry and prose. He is said to have walked the 42km to Belfast to purchase the works of the notable Scottish poets Allan Ramsay and Robert Burns, the first additions to a personal collection that would number over 3,000 books by the time of his death, even without those he lost at sea.

He began to write his own poems soon after, and within a few years was being referred to locally as “the Bard of Dunclung”. He married Margaret Archbold in 1830 after returning from Canada, and they began a family. He took up linen weaving once again, but continued to submit his work to Belfast and Dublin periodicals, the Northern Whig and newspapers in Canada, Scotland and the US too. They were well received, and in 1841 he published his first complete book of poetry, The Fate of McQuillian and O’Neill’s Daughter.

More books would follow, but as his work became more widely known, he moved away from the Ulster-Scots he had favoured in his youth and began to write primarily in English, to ensure he reached a wider audience. Nevertheless, he was immensely proud of his home place and his culture, and his work managed to capture the essence of a society and culture in transition. One of his best known poems, ‘My Ain Native Toun’ manages to convey this fact quite clearly.

Sweet hame o’ my childhood! thy daughters appear
As fair as the stars that enliven our sphere!
Their virtue has lang been a blessing to thee,
And dearer than life they hae aye been to me:
And dear they will be till my banes are laid doun
In the auld hallowed yard o’ my ain native toun.

In the end he would get his wish. He died in 1880 and was buried in the New Cemetery in Ballymena.