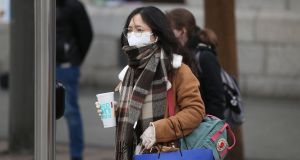 Business group Dublin Chamber said the new restrictions come as a major blow to many firms that had started to turn a corner. Photograph: Nick Bradshaw/ The Irish Times

The Government has been urged to clarify the rationale behind the tightening of Covid-19 restrictions amid claims it has caused confusion across the business community, which was in the process of reopening after lockdown.

Business group Dublin Chamber said the new restrictions come as a major blow to many firms that had started to turn a corner and begun to adjust to the much-changed business environment.

The Government announced new restrictions on Tuesday to combat the spread of coronavirus amid an increase in cases nationally, partially reversing the phased reopening of the economy with people asked to work from home and avoid public transport until September 13th.

This has thrown the reopening plans of many businesses into disarray. Dublin Chamber, which represents 1,300 business in Dublin, said it was surprised that blanket measures had been introduced without clear supporting evidence being made available.

It has called on Government to “explain fully and provide the evidence behind why each of these new measures has been introduced”.

“The business community needs clear evidence regarding why particular decisions are being made,” chief executive Mary Rose Burke said.

“This will help ensure the continued support of the business community and allow businesses to make any changes that are required in order to prevent the spread of Covid-19 within workplaces.

“At the moment we have a one-size-fits-all approach without explanation. That is not sustainable.”

Maureen Lynch, director at recruitment firm Hays, said the Government’s move came as a surprise and is likely to have triggered “a pause” in the reopening plans of many businesses.

A survey conducted by Hays in July found that almost 70 per cent of firms here said their employees had begun returning to the workplace either on a voluntary basis or via split shifts.

Employers’ group Ibec said the majority of non-essential businesses have facilitated remote working where possible until now, and will continue to adhere to Government guidance on the matter.

It noted that Taoiseach Micheál Martin had committed to publishing “a resilience and recovery” roadmap in the coming weeks.

“City and town centre businesses are suffering greatly due to the continued remote working of office staff,” a spokesman said.

“It is vital for the future of these businesses and the viability of our city and town centre infrastructure, that Government provides a clear roadmap post-September 13th for more workers to return to offices,” he added.