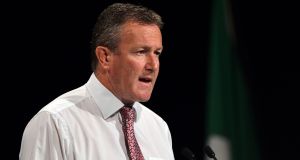 Sinn Féin’s Conor Murphy, the new Minister for Finance. He is likely to be inundated by invitations from the North’s business community

The North’s business community has “a renewed sense of hope” after the Assembly finally got back to work, yet politicians have also been warned by industry leaders that they need to “move fast to start to reverse the damage” of a three-year hiatus.

Business leaders from across the North have welcomed the restoration of a devolved government at Stormont, and pledged to work with all of the newly appointed Ministers.

They are especially keen to meet with the new Minister for the Economy, the DUP MEP Diane Dodds who is married to Nigel Dodds, the deputy leader of the DUP and former Northern Ireland minister for enterprise, trade and Investment.

The new Minister for Finance, Sinn Féin’s Conor Murphy, is also likely to be inundated by invitations from the North’s business community, particularly if the Northern Secretary delivers on his “significant financial package” promise for the North and Tánaiste Simon Coveney makes good on his multi million euro investment commitments to the North.

However, regardless of whatever financial sweetener may be on the way to accompany the New Decade, New Approach” deal and Mr Murphy’s potential spending power, Ann McGregor, chief executive of the Northern Ireland Chamber of Commerce and Industry, said the business community now urgently wanted to to see a clear “pathway” to economic growth.

“After almost three years with no assembly, our MLAs must move fast to start reversing the damage and restore the confidence of businesses, consumers and investors. There needs to be immediate, substantial action to reinvigorate our stagnant economy, build new infrastructure, boost skills and lower the cost of doing business in 2020.”

Ms McGregor also said that this time around the Executive was dealing with a time of “immense change for the wider UK economy” and the challenges which Brexit had brought to these shores.

“As complex trade arrangements are negotiated in the wake of the UK’s withdrawal from the EU, there must be a cross-party approach to representing and protecting the unique interests of Northern Ireland’s economy,” said Ms McGregor.

The New Decade, New Approach deal, put forward by both the Irish and British governments and agreed with all of the North’s political parties, specifically states that one of the new Executive’s top priorities is to “develop a regionally-balanced economy with opportunities for all”.

The deal document outlines that in order to achieve this the Executive will provide funding for major infrastructure, regeneration and tourism projects, and bring more big events to the North like the British Open golf championship.

According to Angela McGowan, the North’s director of the Confederation of British Industry (CBI), businesses in the North will breathe “a collective sigh of relief” that Stormont is back up and running and with a new agenda.

“After three years of under-investment and political stalemate, this bold and ambitious deal is what Northern Ireland needs to get back on to its feet. Commitments made by the UK and Irish governments on infrastructure and an independent fiscal council are very much welcomed.”

CBI Northern Ireland works closely with fellow business organisation Ibec on a joint business council, and both together have welcomed the New Decade, New Approach agreement.

However the council has also cautioned that the Executive has “essential work to do regarding the protection and growth of both economies across this island”.

Ms McGowan added: “Many companies across Northern Ireland have operated all-island businesses for over 20 years now. As a result they have enjoyed higher growth, greater efficiencies, a larger customer base and enjoyed access to a wider pool of suppliers. The clear benefits of the all-island economy must be protected and built upon.”

However, Aodhán Connolly believes the question of how to ensure the all-island economy flourishes is just one of a number of “mission-critical issues” that need to be “sorted immediately”.

Mr Connolly, director of the Northern Ireland Retail Consortium, said there was a lot to be done on the first 100 days of the new Executive taking up office, and businesses were realistic about the significant challenges that lie ahead.

“The priorities will be for health and education, as they should be. For us in business there are a list of mission-critical issues that need to be sorted immediately. We need rates reform timetabled and professed as soon as possible

Farmers’ leaders have also put the Executive on notice that their industry has spent the last three years waiting for “much-needed strategic decisions” to be taken by local ministers.

The president of the Ulster Farmers’ Union, Ivor Ferguson, said the lack of a decision-making process had been “further compounded by the operational issues which the fallout of Brexit could create for our existing trading patterns with our present markets in GB, ROI and the EU”.

Mr Ferguson said farmers and the agri-food sector would want to see the new Executive actively working to tackle these issues.

“The local farming industry is already beginning to experience the roll out of Brexit with new domestic legislation required to provide the legal basis to continue to make the almost £300 million of direct payments to the farmers in Northern Ireland this year, and is yet another crucial reason why we need the leadership and input from a Northern Ireland Executive to help us through this challenging process.”

However, it is not just the farming and agri-food sector that will be beating a path to the doors of the new Northern Ministers to get urgent decisions made on long-standing issues.

Businesses from across every sector from manufacturing to hospitality have been impacted by the vacuum of the decision-making process over the last three years, as Colin Neill, chief executive of the industry group Hospitality Ulster, highlights.

“There are pressing economic issues like the challenges presented by outdated liquor licensing, an uncompetitive rate of hospitality VAT, air passenger duty and the highest business rates in the UK.

“We welcome that licensing legislation is contained in the new Assembly deal, and we will ensure that the leaders of the five main parties will see through their promise and written commitment to us in making those required legislative changes swiftly and decisively for the benefit of the sector and wider economy. We look forward to getting to work on this immediately,” Mr Neill said.

According to the chief executive of Foyle Port in Derry Brian McGrath, while many of the new Ministers that will take charge in the latest version of the Executive could find themselves in unchartered waters, the possibility now exists to chart a new course for the North’s economy.

“It’s time to seize the opportunity and properly invest in the northwest and unlock its vast economic potential to create jobs and boost investment.”