Increased losses at hotel and restaurant complex come in spite of 7.5% revenue leap 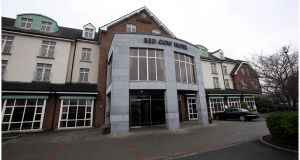 The Red Cow complex is owned by the Moran family. Revenues rose from €17.5 million to €18.8 million. Photograph: Brenda Fitzsimons

The Red Cow Complex on the outskirts of Dublin had a “strong” year of trading in 2018, but expansion costs contributed to pretax losses increasing almost threefold to €2.3 million.

New accounts lodged by Cobglen Dac show the business recorded the higher losses in spite of revenues increasing by 7.3 per cent from €17.5 million to €18.8 million.

Tracey Moran, director at the family-owned business, said its board was “pleased with the strong 2018 trading results”.

Ms Moran said earnings before interest tax depreciation and amortisation (ebitda) – seen as a good measure of cashflow – for the year were €4.9 million.

The pretax loss takes into account combined non-cash amortisation and depreciation costs of €4.1 million and interest payments increasing by 69 per cent to €1.33 million. The additional interest payments reflected additional borrowings linked to investment, while the loss also took account of a once-off non-trading expense of €1.025 million.

“The hotel has transformed from a 123-bedroom operation to 319 rooms. Management added an additional 44 rooms during 2019 and these have traded in line with expectations including four purpose-built serviced apartments,” said Ms Moran.

The company is planning the addition of another 114 rooms this year, along with enhanced conferencing and banqueting facilities.

Shareholder funds totalled €50.9 million as the company’s cash increased from €2.9 million to €9.8 million.