New move to boost trade between Ireland and Africa 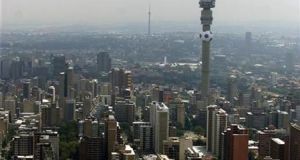 Johannesburg, South Africa. Enterprise Ireland has an office in Johannesburg and a presence in Nairobi in Kenya and Lagos in Nigeria

Plans are afoot to increase the value of two-way trade between the Republic of Ireland and Africa to at least €5 billion by 2025.

Details of the plan are contained in a new Government strategy document focused on deepening ties between the State and the continent.

With a population of about 1.2 billion people currently, Africa is expected to account for half of the world population growth by 2050.

Moreover, the European Union is currently Africa’s largest trade, investment and development partner, accounting for 36 per cent of the continent’s external trade and 40 per cent of foreign direct investment (FDI).

“Ireland’s business links with Africa are increasing in both directions and, as Africa’s growth continues, these links – whether trade in goods and services, or investments – will deepen and mature,” Ireland’s Strategy for Africa to 2025 says.

Enterprise Ireland has an office in Johannesburg and a presence in Nairobi and Lagos, where Bord Bia is also present.

Under the new strategy, the aim is to increase the agencies’ footprint on the continent so it can better support Irish exporters. There are also plans to appoint an IDA Ireland pathfinder.

Agencies will be supported by Irish Embassies, of which there are 12 with three more due to open in West African in the coming years.

According to the strategy document, there are also plans to expand and enhance the network of double taxation agreements in Africa, increase the number of fellowships available to African students, and support efforts to increase direct air and sea links between Ireland and the continent.

More than 205 of its companies are already active in South Africa and 75 within Kenya, with exports to the two countries growing in the last year.

Enterprise Ireland client companies exported more than €113 million to South Africa in 2018, an increase of 12 per cent on 2017. Exports to Kenya, meanwhile, were up 4 per cent last year to €29 million.

According to the agency, some 400 client companies are active in sub-Saharan Africa, exporting a total value of €400 million.