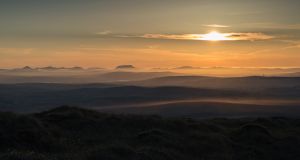 The Australian exploration company Walkabout Resources has told investors that it has “successfully” identified “numerous” potential target areas to drill in Northern Ireland.

In an update on its exploration activities in the North, Walkabout said target areas had been identified following a SkyTEM electromagnetic airborne survey of its key licence in the Sperrin Mountains in Tyrone.

Walkabout Resources, whose main development projects are located in Africa, said the SkyTEM targets “fit in well” with the results of previous soil sampling and structural surveys in the Tyrone mountains which pointed to “high grade base and precious metal occurrences in the area”.

The company said it has removed any targets which have been identified as cultural or located in environmental sensitive areas from any follow up exploration plans following the electromagnetic airborne survey.

The Australian group is one of a growing number of international exploration companies that want to mine for gold and other precious metals in the Northern Ireland.

It first set up in the North last November following its acquisition of an exploration portfolio from the British company Lonmin and currently holds more than five licences throughout the North.

This includes a Slieve Gallion licence close to the Curraghinalt gold resource, which is owned by Dalradian Resources and where the Canadian company wants to develop a controversial gold mine in Tyrone.

Trevor Benson, chairman of Walkabout has told shareholders that in relation to Northern Ireland the Australian company is “assembling a portfolio of highly prospective exploration licences for gold and base metals in a part of Europe that has seen significant under-prospecting for decades.”