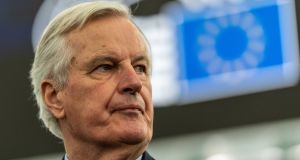 The EU’s chief Brexit negotiator Michel Barnier has rejected British demands for a Canada-style trade deal that would free the UK from EU rules as he made a thinly veiled warning to Boris Johnson not to break his word.

Speaking in response to a landmark speech by David Frost, the UK’s Brexit negotiator, Barnier said such an offer was not on the table and noted that the prime minister had agreed only six months ago to stick to the EU’s state aid rules and current social and environmental regulations after the transition period.

Within hours of Barnier’s comments, the UK government seized upon a change to the EU’s draft negotiating mandate, leaked to the Guardian newspaper, which sources in Downing Street suggested was an attempt to win back the Parthenon marbles for Athens.

The latest draft of the EU’s negotiating position calls for both sides to “address issues relating to the return or restitution of unlawfully removed cultural objects to their countries of origin”.

“This is just not happening,” a Downing Street source said with reference to suggestions that the language referred to the return of the ancient marble sculptures to Athens. “And it shows a troubling lack of seriousness about negotiations on the EU side.”

The Downing Street intervention came despite both Greek and EU officials insisting that the clause, proposed by Italy, Spain, Cyprus and Greece, was not related to the marbles held by the British museum but merely to a desire to stop the fraudulent movement of antiquities around Europe.

The explosion of rhetoric on both sides of the Channel offers little hope that the next 11 months of talks will be smooth.

In his speech on Monday night, Frost had set a tough line on EU demands by claiming the consent of the British public would “snap dramatically and finally” if the UK continued to be bound to the EU rulebook after December 2020. The latest EU negotiating mandate says those level playing field provisions should further develop “over time”.

Frost went on to suggest that Brussels should offer a trade deal similar to that given to Canada, which avoided any European court of justice supervision of standards or demands on “alignment” with Brussels.

Barnier’s response, and that of other EU officials, was one of polite fury.

“We have proposed a trade agreement with a country that has a very particular and unique close geographical proximity, not like Canada, not like South Korea and not like Japan, ” Barnier said. “Very particular. We are ready to propose and work very quickly with Britain on the basis of the political declaration, which was agreed with Boris Johnson. We stand ready to propose this agreement, if the UK wants it.”

Speaking separately, the EU’s trade commissioner, Phil Hogan, warned that the UK would bear “full responsibility” for its choices.