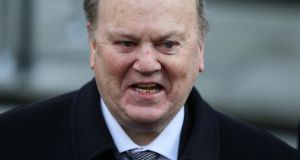 Minister for Finance Michael Noonan has said the European Commission was departing from what had been agreed internationally at OECD level. Photograph: Brian Lawless/PA Wire

Minister for Finance Michael Noonan has launched a stinging attack on the European Commission over its proposals on corporate tax reform, accusing it of reneging on previous agreements and of “bad practice”.

Mr Noonan also appeared to suggest he would delay any progress on the proposals for common rules on calculating corporation tax, known as the common consolidated corporate tax base (CCCTB).

He also suggested that the commission’s plans could derail existing international agreements to prevent tax avoidance by multinational companies.

Mr Noonan departed from a prepared script in the course of his address to the Irish Taxation Institute’s annual dinner last Friday evening to make some highly pointed comments about the commission.

“Now, I can’t work to two masters who’ve given me different sets of instructions, and I can’t dance to two different tunes,” Mr Noonan said.

“The commission is departing from what was agreed internationally at OECD level and I think that’s bad practice.”

Mr Noonan went on to give two examples of the commission’s “bad practice”.

He said the OECD had agreed that national tax authorities should share information on a confidential basis.

“Now the commission is saying that there must be an exchange of tax information country to country in Europe and that it must be published.”

If the commission continued with this plan, he said, it would derail the progress made by the OECD countries through the Beps process in combating large-scale tax avoidance by big companies.

“That’s going to blow the agreement that was already there apart and rather than make progress, it’s going to regress,” Mr Noonan warned.

Mr Noonan also outlined another objection to the CCCTB plan proposed by the commission, which aims to have a common tax base for companies operating across the European Union.

The Government fears the process would mean profits currently taxed in Ireland could in future be apportioned to other EU countries and taxed there.

“That’s a breach of the OECD principles,” Mr Noonan said.

He appeared to suggest Ireland would delay the process in Brussels.

“That’s going off in a different direction entirely and I never veto anything in Brussels and we’ll talk everything through, ah, but that one will take a lot of talk,” Mr Noonan said to laughter from the guests.

A spokesman for Mr Noonan said he was “not trying to pick a fight with anyone”.

However, he said, it was the Government’s position that people should act on the new OECD rules, rather than engaging in a lengthy EU process to agree more stringent rule which would be likely to be rejected by non-EU countries.