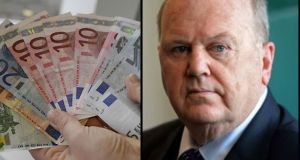 Michael Noonan: ‘There is a good case to reduce personal taxation rates further.’

Personal tax should be cut further, according to Minister for Finance Michael Noonan who said it was important the views of taxpayers were not forgotten in the debate on the public finances.

With the Fine Gael leadership contest set to get under way in the coming weeks, the Minister underlined the party’s commitment to reducing taxes on income.

“There is a good case to reduce personal taxation rates further, subject to the availability of budgetary resources,” he told the annual dinner of the Irish Tax Institute in Dublin.

Mr Noonan said he recognised that high marginal rates of income tax applied to many people.

At a time when much public debate was focused on the need to improve public services in areas such as health and boost key investment in housing, “it is important that in the discourse of the appropriate amount of tax and spend in our economy, the views of those who contribute the majority of the taxation revenue are heard”.

One of Fine Gael’s key policy planks in the last general election was the promise to phase out the USC, the charge on income introduced in 2011.

However, the programme for government pledges that at least two-thirds of any extra resources available in the annual budget should go on additional spending, with at most one third devoted to tax cuts.

With the public finances remaining strong and growth forecasts generally optimistic for this year, Fine Gael may hope to have cash available for some tax reductions in the next budget package.

While the Minister pointed out that tax revenue had risen 40 per cent since the worst of the economic crisis, the president of the Irish Tax Institute, Mark Barrett, warned at the dinner that the tax base was exposed to volatility because of its reliance on a relatively small number of companies and wealthier personal taxpayers.

“Any volatility in either will cause waves rather than ripples for the exchequer. We cannot run a country in which a few companies are too big to fail, or in which too few people bear the burden of taxation.”