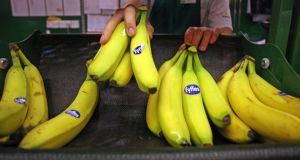 The merger of Fyffes with Chiquita for €362m contributed to the high total deal value in the food sector. Photograph: Chris Ratcliffe/Bloomberg

The number and value of buyouts involving Irish companies have risen significantly this year, reflecting what industry sources said was a strengthening of recovery in Ireland and in the global economy.

According to the latest Merger and Acquisitions Tracker Survey by Investec, the value of deals conducted in the first quarter of 2014 rose to €6.1 billion, compared with €2.3 billion for the equivalent period last year.

The survey found 59 deals were recorded during the quarter, which represents an increase of 9.3 per cent on the 54 deals recorded during each of quarters one and four in 2013.

There were a number of high-profile transactions during the quarter, most notably the acquisition of Bord Gáis Energy by Centrica for €1.1 billion.


Significant sale
This was the most significant sale of a semi-State corporate asset by the State since the privatisation of Aer Lingus in 2005, Investec said.

The IT and telecoms sectors saw the most activity, accounting for almost 34 per cent of the total deal volume during the first quarter, with 19 deals recorded. Notable transactions in the sector included the acquisition of Skillsoft Limited by Charterhouse Capital and the acquisition of CarTrawler by a consortium including BC Partners and Insight Venture Partners for a reported €450 million.

The food and food services sector was the second most active sector during the period with 13 deals totalling €1.09 billion. The high total deal value is attributable to the high-profile merger of Fyffes with Chiquita for €362 million and two acquisitions by Aryzta – Canadian-based Pineridge Bakery for €245 million and US-based Cloverhill Pastry for €485 million.

The industrial sector recorded five deals, with the Bord Gáis Energy acquisition by Centrica recorded as the largest deal.


Health sector
Seven deals were recorded in the health and pharmaceutical sector. The total disclosed deal value for six of the transactions was €1.8 billion.

A number of large purchases were recorded including the acquisition of Cadence Pharmaceuticals by Mallinckrodt for €878 million and Horizon Pharma’s acquisition of Vidara for a reported €474 million.

There was also activity in the media sector during the quarter with four deals totalling €49 million recorded. The largest deal saw the acquisition of Global Radio by Communicorp for €42 million.

Separately, a report from Deloitte has predicted global M&A volumes will reach 8,000 deals in the second quarter of this year.