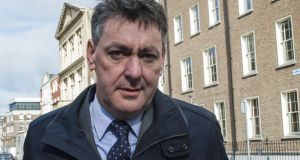 Fianna Fáil MEP Billy Kelleher: ‘The primary function of Cap is to ensure food security, protect farm incomes and develop rural communities. Within the three proposals adopted today, significant progress was made on all three’

The design of the EU’s huge agricultural subsidies programme for the next seven years came a step closer on Friday as the European Parliament formed a common position in a crunch week of debates and votes.

MEPs concluded voting on the bulk of the legislation that forms the Common Agricultural Policy (Cap), a lifeline for farmers that is expected to account for over a third of the bloc’s budget from 2021 to 2027.

Agreements between the three main political blocks of Fine Gael’s European People’s Party, Fianna Fáil’s Renew Europe and the Progressive Alliance of Socialists and Democrats helped forge the majorities to get the package passed.

“The Common Agricultural Policy adopted by the European Parliament today is not perfect and is far from ideal, but it’s immeasurably better and more climate-friendly than anything that has come before it,” said Fianna Fáil MEP Billy Kelleher in a statement following the votes.

“The primary function of Cap is to ensure food security, protect farm incomes and develop rural communities. Within the three proposals adopted today, significant progress was made on all three.”

Aspects of the legislation had attracted fierce criticism by green parties and environmental groups, who argued that changes vital to achieve climate change goals and protect biodiversity had been watered down and could put the bloc’s goals of rescuing biodiversity and slashing carbon emissions by 60 per cent by 2030 out of reach.

However, supporters of the deal argued its guarantees were as much as could win majority support, and made the receipt of farming subsidies conditional on implementing environmentally-friendly practices while setting out additional funds for further eco-schemes.

A meat industry-backed proposal to ban the use of meaty terms such as “veggie burger” for vegetarian products was defeated, but MEPs approved tightening restrictions on the use of dairy terms for vegan products, which would mean banning names such as “substitute butter”.

The agreed positions will now form the parliament’s mandate for negotiations with EU national governments, which is the next step in finalising the policy.

In the talks the parliament negotiators will now push for policies including increased sanctions on farmers who fail to comply with EU requirements, tweaks to the subsidy model to reduce payments to larger farms, and supports to young farmers.