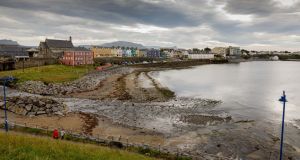 Bundoran in Co Donegal. At the peak of the lockdown in April, almost a third of the labour force in Donegal was in receipt of the Pandemic Unemployment Payment. Photograph: James Connolly

The western region suffered a greater employment shock from Covid-19 than the rest of the State, according to a new study from the Central Bank and the Western Development Commission .

The research found that the counties of Clare, Donegal, Galway, Leitrim, Mayo, Limerick, Roscommon, Kerry and Sligo – also known as the Atlantic Economic Corridor (AEC) – were hit hardest because of the predominance of small, micro-enterprises and the concentration of jobs in consumer-facing sectors such as tourism and accommodation.

This left them more vulnerable economically to public health restrictions, the report concludes.

It noted that at the peak of the lockdown in April, almost a third of the labour force in Kerry and Donegal were in receipt of the Pandemic Unemployment Payment (PUP).

Workers in the “business economy” in these counties are far more likely to work in very small firms: 34 per cent work in businesses with under 10 employees, compared to 15.8 per cent in Dublin.

In Leitrim and Roscommon, almost half of workers are in very small firms and few in very large companies, signifying a lack of multinational presence, the report said.

When faced with economic shocks, these small firms are more likely to struggle financially, in terms of liquidity and cost management, it said.

Another factor playing into the regional disparity, the report found, is the concentration of employment towards tourism, agriculture, traditional sectors and public services, which have been among the worst-hit sectors.

The western counties have a comparatively higher share of employment in the highly Covid-exposed accommodation and food sector: 7.2 per cent versus 5 per cent for other counties. Counties such as Kerry (10.5 per cent), Donegal (7.9 per cent) and Mayo (7.6 per cent) stand out.

The report said the Government’s policy response to the pandemic, the PUP and the wage support scheme, has provided essential support to western counties.

A separate Central Bank report, published on Friday, looked at how wage subsidies have supported job retention in recent months.

It shows how, during the phased reopening of the economy, workers in consumer-facing sectors – accommodation and food, tourism, and some retail – increasingly moved on to the Government’s Employment Wage Subsidy Scheme (EWSS).

It also found that younger, female workers have increasingly taken up wage subsidy supports, while older males have moved off the scheme.

“In the short term, while the path of the virus remains unclear, an approach that prioritises liquidity supports for firms, income supports for workers, and, above all, job retention is warranted,” it said.