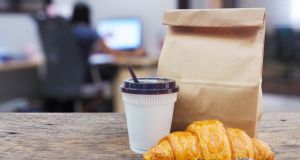 Dubliners spend the most on takeaways while rural households spent more per week than their urban counterparts. Photograph: iStock

Irish households spent an average of €845.12 per week between February 2015 and February 2016, an increase of 4.3 per cent on the same period five years earlier.

The household budget survey 2015-2016, conducted by the Central Statistics Office (CSO), showed that spending on alcoholic drink and tobacco witnessed the most significant percentage drop of 29.1 per cent as households spent an average of €28 per week. Despite the drop in spend, the proportion of alcohol consumed at home increased to just over 51 per cent. The CSO notes that people tend to under-report their expenditure on alcohol and tobacco.

Household expenditure on food also dropped in line with its steady decline over the past 35 years according to the CSO. Statistician Claire Burke said that this could be attributed in part to the increasing market share of the German discount retailers. Just 14.6 per cent of household spend went on food in the period with roughly €97 being spent on eating at home and €26 per week spent on dining out.

Since 2010, disposable income, which is gross income minus income tax and social insurance, increased by nearly 3 per cent to €909.25 per week.

Transport expenses also increased in the period by nearly 7 per cent. The CSO suggests that this is due to increased expenditure on car purchases. When those purchases are excluded, transport spend drops by 7.1 per cent.

In Dublin, households spent the most on takeaways including takeaway coffee and tea while the West of Ireland spent the least in that category.