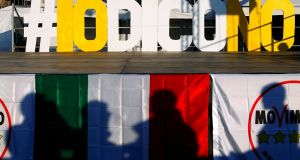 Shadows are cast against an Italian flag which reads “I say No” during a march in Rome ahead of the upcoming constitutional reform referendum. Photograph: Remo Casilli/Reuters

In 13 years as a senator in Rome, Luigi Zanda has seen four prime ministers come and go. So while investors may be concerned that another might be toppled after Sunday’s constitutional referendum, Zanda (74) is relatively sanguine. “Italy knows how to manage instability,” the chief whip for the governing Democratic Party says in an interview in his senate office. “It won’t be Armageddon if ‘No’ wins. Italy will not collapse, its institutions are solid.”

The final days of campaigning have taken place against a crescendo of anxiety in international markets, with currency volatility spiking, fragile bank stocks near a three-year low and commentators predicting the unravelling of not just the Italian government, but the euro itself.

With the Italian president and mainstream parties already planning measures to stabilise the situation if prime minister Matteo Renzi is defeated, some analysts more accustomed to Italian ways are calling for calm. “Markets are over-estimating the impact of a ‘No’ vote,” says Andrea Montanino, a former executive director for Italy at the International Monetary Fund. “There’ll be no disaster, because this is an important reform – but it isn’t Brexit or Trump.”

Still, early moves would probably to some extent unwind, the ABN Amro team said. Italy’s economic vulnerabilities are the key issue, whatever the result of the vote, and the European Central Bank’s quantitative-easing programme offers protection for investors.

“Ongoing QE policy should limit the upside for Italy’s government bond yields,” Kounis and Schuiling said. Even after the recent declines, Italy’s 10-year bonds are still yielding about 2 per cent, a far cry from the levels seen at the peak of the financial crisis.

Italians voters themselves are expecting relatively little impact from the referendum either way. An opinion poll by the Ipsos institute, released before a ban on publishing such surveys came into force on November19th, showed that 47 per cent of Italians believed the result of the referendum would not change anything, 32 per cent said things would change for the better and only 9 per cent said they would worsen.

“If ‘Yes’ wins, Italy is stronger, if ‘No’ wins, the risk of a leap into the dark is clear to everyone,” Renzi told newspaper Corriere della Sera in an interview published on Friday. “I’m not worried about international markets. I’d be sorry instead for neighbourhood markets, for people who go and buy things, who defend their purchasing power, their savings.”

The worst-case scenario would see Banca Monte dei Paschi di Siena fail as a result of the political turbulence, then set off a cascade of other bank collapses. A “No” vote on its own though would not be enough for that to happen, according to Luca Raffellini, head of business and financial services for consultant Frost and Sullivan.

Other elements would be required, such as a struggle to appoint a new government or a fumble by a new finance minister, Raffellini argues. Instead, he is predicting a “relatively quick and painless” transition to a new government, in contrast to the struggles in euro-zone neighbours such as Belgium and Spain.

For Montanino, now director of the Atlantic Council’s global economics program in Washington, the worst effect of a “No” would be the impact on Italy’s image abroad. “The world’s perception of Italy had improved a bit since Berlusconi was premier and a ‘No’ will make people think that Italy isn’t capable of making reforms,” he says. “It’s already difficult to convince people to invest in Europe now; it will become even harder to persuade them to invest in Italy.” – (Bloomberg)