‘Saving Private Renzi’: PM stakes all on poll that could bring down Italy’s banks 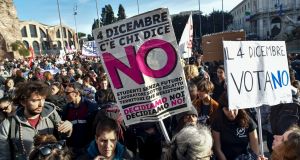 Demonstrators during a “no” vote rally to the upcoming referendum on constitutional reform in Rome. Photograp: AFP/Getty Images

For the European establishment and the world’s business community, Sunday’s controversial Italian referendum has become a case of “Saving Private Renzi”.

The latest man to sign up for the “cause” was former Italian prime minister and former European Commission president Romano Prodi on Wednesday.

Prodi joins a long list of influential public figures and institutions who have called on Italians to vote “Yes” in Sunday’s constitutional reform referendum, an issue which may well have developed into a nationwide confidence vote on prime minister Matteo Renzi.

Depending on your viewpoint, this referendum represents either Renzi’s political credo of change or an opportunity for him to generate more power and control for himself.

He claims his reforms, in particular wholesale changes to the Senate, are intended to streamline government and guarantee executive stability. Those opposed, ranging from the far-left to the likes of former premier and media tycoon Silvio Berlusconi, argue that the changes are “anti-democratic”. Under the terms of already approved electoral legislation, a 25-26 per cent popular vote could earn a 54 per cent share of parliamentary seats.

Coffee magnate Ricardo Illy, a former mayor of Trieste and a former president of the Friuli-Venezia-Giulia region, summed up the business community line yesterday, telling La Repubblica: “A yes vote will modernise the constitution and will make the country more competitive. Otherwise, the agony of the last 30 years [of low growth rates] will continue...”

So has everyone decided that it is a matter of international urgency that the state-run, economic research think-tank, CNEL, be closed down?

Or do they feel that it is high time that the powers of regional Italian government were severely curbed?

Of course not. Even if the changes proposed by Sunday’s referendum also concern CNEL and regional government, it is the political fallout of a defeat for Renzi that worries observers, European chancelleries and the international business community alike.

The point is that Italy is not Ireland nor Greece, rather it is a member of the G7 and the eighth-largest economy in the world. Put simply, markets do not want Italy to have a “wobbly”, a period of political uncertainty which would cause further problems for its already ailing economy.

The establishment’s worst case scenario is that a defeat for Renzi would trigger his resignation, followed in turn by market panic, with bond spreads soaring and ratings agencies poised to give Italy a further thumbs down.

Renzi himself originally stated that he would resign if he lost the vote. With the numbers suggesting defeat is likely and concern growing in other European capitals, he has since withdrawn that threat. However, it remains a possibility, especially if the vote is lopsided. And, in any case, his standing would be considerably diminished.

The harbingers of doom and gloom have been telling whoever would listen for weeks that a defeat could prompt Italy to withdraw from the euro, and to reintroduce and then devalue the lira, in the process defaulting on Italian debt.   (That analysis is based on the fact that the three major “No” forces – the Northern League, the Five Star protest movement of former comedian Beppe Grillo and Silvio Berlusconi’s Forza Italia are all fundamentally euro-sceptic.)

According to many, the very future of the euro itself is about to pass through the Italian ballot box. Worse still, they argue, neither the European Central Bank nor other European institutions have the wherewithal or the means with which to respond to a crisis in an economy as large as that of Italy.

So, what has so spooked the economists and the market analysts?  The short answer is – banks.

As the Financial Times pointed out last weekend, there are maybe eight major banks at risk of collapse if and when the post-referendum waters get choppy.

For these and other banks, years of clientelist, non-meritocratic banking management – loans to friends – may be coming home to roost.

Currently, Italian banks have approximately €360 billion of bad loans on their books. In other words, 17-21 per cent of Italian loans are NPLs (non performing loans), a figure that represents a fifth of GDP, by far the highest in the G7 countries. It amounts to about a third of all the euro zone’s bad debt and to about a fifth of all consumer loans in Italy.

Not surprisingly, Italian banking stocks have taken a battering this year. Shares in the Monte dei Paschi di Siena have declined in value by -88 per cent in the last year.

Popolare dell’Emilia Romagna has lost half its value, the Banca Popolare di Milano is 69 per cent weaker, Fineco Bank is off -35 per cent and Intesa Sanpaolo is down 39 per cent, while UBI Banca and Unicredit have given up 69 and 66 per cent of their value respectively.

Clearly, the bank which most worries analysts is Monte dei Paschi di Siena, which is currently attempting to raise €5 billion in fresh capital at the same time as shedding €28 billion in bad debt before the year’s end.

Nor does it augur well that the man appointed in September to head the bank, Marco Morelli, was fined €208,500 by the Bank of Italy in October 2013 for “grave irregularities” committed as deputy general director of the lender.

Obviously, as US ambassador John Philips argued recently, a “No” vote might be seen as a negative message of “No Change Around Here”. That and a period of political uncertainty would not much help the Monte dei Paschi recapitalisation, perhaps ultimately forcing creditors to take a loss.

In such a Doomsday scenario, other banks such as Unicredit could then be at risk of “contagion”.

In a 2013 document called The Euro Area Adjustment – About Halfway There, US bank JP Morgan said that in the aftermath of fascist dictatorship, southern European countries were and still are hamstrung by constitutions which showed “a strong socialist influence”. JP Morgan is involved in the attempt to clean up Monte dei Paschi di Siena.

Italy’s banks, obviously, are not suffering merely from the referendum blues. They are functioning in the context of an under-performing Italian economy.  And there’s the rub.

With 4.5 million Italians currently living on the poverty threshold, with unemployment at 11.9 per cent, with youth unemployment at approximately 40 per cent, and with average salaries at €1,560 per month, there could be a lot of unhappy people out there, just itching for an anti-establishment hat-trick in the wake of Brexit and Donald Trump.

It may be the failed policies of the past that have put them in this position but, if the polls are correct, there is little enthusiasm for Renzi’s argument that this time will be different if only they will cede more power to Rome.