Mathias Cormann: Irish businesses could use Australia as way into greater Asian market 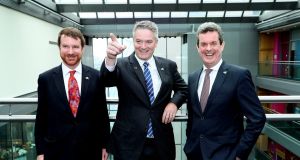 It is in both Ireland and Australia’s interest to trade more freely, Australian finance minister Mathias Cormann told a delegation at a reception held by PwC as part of a trade mission.

“We are here because we’d like to do more business with you. We’re also here because we’re very keen to ensure that a future high-quality European-Australian free trade agreement will continue to allow investment flows”, Mr Cormann added.

Stressing the opportunities that exist for both countries if trade links are enhanced, the minister said that Irish business could use Australia as a bridge into the greater Asian market while Australian companies could use Ireland as a bridge to Europe.

As to the decision of the UK to leave the European Union, Mr Cormann wouldn’t be drawn on the effect it has had, or will have, on the Australian economy. However, speaking to The Irish Times he conceded that “as a trading nation, it matters to us” saying that he wanted to see a “sensible outcome”.

The event, aiming to “showcase Ireland as a gateway to Europe”, welcomed over 100 business leaders from Ireland and Australia.

PwC managing partner, Feargal O’Rourke, told delegates that “there’s no better place than Ireland for you to do business in the European Union”.

While stressing the importance of a double tax agreement with Australia, Mr O’Rourke said that business and trade links will be “enhanced” between the two countries as the EU looks to open a bilateral trade agreement.

Australia is Ireland’s 12th most significant trading partner, well behind the US, the UK and Belgium.

State calls for applications to €500m disruptive technologies fund 05:17
Women accounted for 60% Iseq board recruits in 2019 05:16
How to upgrade your home entertainment system for less 05:15
New booking system Tempii takes the pain out of managing temps 05:10
Dublin and Cork airports look at setting up pre-flight Covid testing centres 05:08