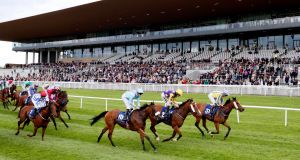 Action at the Curragh. Racing and breeding employ around 15,000 people and generate more than €2 billion a year. Photograph: Peter Mooney/Inpho

Horseracing is practically under starter’s orders in France, where it resumes behind closed doors in Longchamp, Paris, on Monday, after nearly two months. Britain seems poised to follow suit later this month. However, there is far less clarity in Europe’s leading racing nation, Ireland.

That is surprising in some ways.

After initial Covid-19 restrictions began in March, State body Horseracing Ireland (HRI), which administers the sport in all 32 counties, decided to continue racing until March 24th, when it shut down ahead of the more stringent lockdown imposed by the Government.

While the behind-closed-doors exercise was brief enough, most in the sport believed that this set a template for resumption, so consequently hoped this would happen sooner rather than later. It now appears that the Government intends that racing should restart on June 29th, the date set for some sports to resume.

HRI issued a statement this week saying that it was in talks with the Government about the possibility of resuming earlier. However, many of those working in racing are disappointed that the picture is no clearer, and some warn that waiting until the end of June will create serious difficulties for many who depend on the activity for a living.

Racing and breeding employ around 15,000 people and generate more than €2 billion a year. The payoff from this is mostly in rural Ireland, whose recovery from the last recession was trailing the country’s cities long before anyone had heard of coronavirus.

So far, the State’s efforts to contain coronavirus have shut many industries, leaving almost one in three workers out of a job, a number that seems certain to grow. The measures have imposed unprecedented limits on people’s liberty and will probably do irreversible damage to whatever wealth they have managed to accumulate.

In those circumstances, it may seem unreasonable to engage in special pleading for one affected industry, but equally, it could be argued that the Government should try to salvage whatever it can from this situation. If a particular industry can restart while staying within social-distancing rules, creating some economic activity and presumably taking workers off Covid-19 supports or welfare, it should probably be allowed to do so with the minimum of delay.