Devastated by the impact of Covid-19, the industry will take ‘several years’ to recover 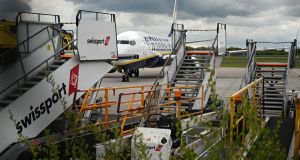 Getting back in the air is not just an imperative for the airlines, it is also vital for the health of the economy. Photograph: Oli Scarff / AFP

Ireland’s aviation industry has been devasted by the impact of Covid-19 on the economy. Stobart Air looks set to be rescued by the Stobart Group in the UK while CityJet is in examinership.

Yesterday, Ryanair announced plans to lay off 3,000 staff while Aer Lingus is to consult its employees on a plan to reduce its headcount by up to 20 per cent. Lockdown restrictions mean Aer Lingus flights are more about transporting cargo than passengers.

Willie Walsh, chief executive of IAG, the parent group of Aer Lingus, British Airways and other airlines, said it would be “several years” before air travel would get back to the level of 2019. Ryanair said the recovery in passenger demand and pricing will take at least two years, until summer 2022.

As an island nation, air travel is hugely important to the health of the Irish economy. The large network of flights to north America that has been built up over recent years has helped to underpin multinational investment from the United States.

And the tourists who come here usually disperse to the four corners of the State, helping to support rural communities throughout the country.

With EU state aid restrictions loosened, Aer France-KLM, Lufthansa and Swiss are just some of the big European airlines that have sought supports from their national governments. American carriers are being supported by Donald Trump’s administration.

Socialist TD Paul Murphy wants Aer Lingus renationalised, which would be a recipe for disaster.

Ryanair and Aer Lingus are both well capitalised businesses so they might not need access to direct financial support or credit at this point. But they will need support from the Government and state agencies to help rebuild their flight schedules over time, and market the country as open for business.

Getting back in the air is not just an imperative for the airlines, it is also vital for the health of the economy. There is huge aviation expertise here capable of devising a rescue plan for the sector. Forming a new Government and appointing a Minister for Transport to lead from the front would be a good start.