Donohoe refuses to be pressed on Goodman Group tax arrangement

Minister updates committee on double-tax accords with Netherlands and Switzerland 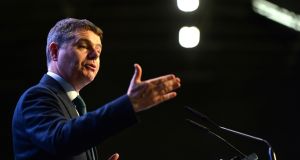 Minister for Finance Paschal Donohoe wouldn’t be drawn on instances of Irish companies booking profits abroad and paying little or no tax but he did flag that Revenue would get any resources it needed to investigate information that comes into the public domain.

At a meeting of the Oireachtas finance committee on Tuesday, Mr Donohoe was questioned on a story in The Irish Times, which reported that nine companies in the Goodman Group made a €170 million profit last year and booked the bulk of its profits in Luxembourg but that those profits were largely untaxed.

Labour TD Joan Burton questioned Mr Donohoe on the case, in addition to cases that emerged from the Panama Papers leak.

The Minister for Finance said that the Revenue’s investigation division has reviewed material that’s entered the public domain. “Any resource the [Revenue] commission needs I’m always willing to make available to them,” Mr Donohoe said.

The Minister was updating the committee on two double-taxation agreements (DTAs) signed between the State and the Netherlands and with Switzerland.

A DTA ensures that individuals and companies pay tax to only one country, with the specific agreement determining which country collects the tax based on factors including a company’s or individual’s residence.

The Minister made it clear that the Republic’s agreement with Luxembourg will be updated by November at the latest, resulting from progress in the Beps (base erosion and profit shifting) process led by the Organisation for Economic Co-operation and Development (OECD).

It was the agreement with Luxembourg, however, that most of themmittee’s questioning was focused on in light of the Irish Times story that detailed how four Goodman Group companies with no employees produced profits of €123 million and paid almost no tax.

Ms Burton asked what Revenue is doing “about high-net-worth individuals”. “You’re referring to a particular company that is covered in a major newspaper today and I can understand why you want to raise it. It’s simply not appropriate for me to comment on it,” Mr Donohoe said.

“The Revenue Commissioners rigorously follow up any issues in relation to breach of tax law and I’m not going to make a comment that can be interpreted as applying to any individual or company. I don’t think that would be appropriate.”

Following questioning by Sinn Féin TD Pearse Doherty, Mr Donohoe did note that ratification of the OECD changes between the Republic and Luxembourg “will make it significantly harder for tax avoidance to happen in the way it has in the past”.

“If I go any further than that my comments are going to be associated with the company today which wouldn’t be appropriate,” Mr Donohoe added.

Those changes would see the DTA between the two countries apply to existing companies, he did note, however.

Mr Doherty instanced the case of a local shop he was aware of, which Revenue investigated because it sold Mass cards, which the tax collector argued increased its customer throughput. Pressed on whether Revenue was paying as much attention to large businesses as they appeared to be to SMEs, Mr Donohoe said: “In my experience of dealing with the Revenue, they take the issue of evading tax as seriously if you’re a big company as if you’re a small one.”