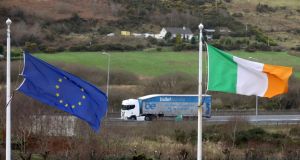 If no trade deal was reached the two sides would have traded on what are called World Trade Organisation terms. Photograph: Paul Faith/AFP

Tying up a trade deal between the European Union and United Kingdom boosts the prospects for the Irish economy next year, largely because it removes a big threat to food exports and wider trade. The Irish economy will dodge the bullet of higher tariffs which would have meant huge problems, particularly for the beef sector. The one word running through the reaction statements from business organisations yesterday was “relief.”

Under the agreement, announced on Thursday, no tariffs or quotas will apply on trade between the two sides. The one Irish sector directly hit by the terms of a deal will be the fishing industry, which will have more restricted access to key UK waters and is demanding support and compensation. The other short-term concern will be that no phasing in period was agreed for the new customs regime to apply to UK/EU trade from January 1, meaning delays are likely as goods move in both directions.

Official forecasts published with October’s budget were based on no-deal being reached between the two sides – and so the outlook has now improved. Irish economic growth could be as much as three percentage points higher next year with a trade deal in place, according to official estimates – meaning possible Gross Domestic Product (GDP) growth of 4.5 per cent in 2021 rather than the current 1.7 per cent forecast. Finalising a deal would also avoid the initial chaos and cost of a no-deal scenario and the longer-term damage it would cause to UK/EU relations.

However, new customs barriers will be erected between Britain and Ireland and in the years ahead these will have a fundamental impact, increasing the cost of trade.There will be no more frictionless trade and Brexit still means a fundamental change in the trading relationship. Farmers and food companies are nervous of the longer-term impact of competing with cheap imports in the UK market. Irish economic growth will still be lower in the years ahead than if the UK remained in the EU, but the hit would have been more severe and more sudden without a trade deal. The Brexit talks have, from the start, essentially been an exercise in damage limitation on all sides.

Trade between the EU and UK will become more complicated and costly even with a deal, as the UK leaves the EU single market and customs union. However, if no trade deal had been reached the two sides would have traded on what are called World Trade Organisation (WTO) terms. This would have meant tariffs, or import duties, would have applied on trade in both directions.

Tariffs are highest in the food sector and this would have caused huge problems for Irish exporters to the UK, particularly in the beef sector, threatening jobs and farm incomes. High tariff levels of 70 per cent or more would have applied to Irish beef sales in the UK market in the case of WTO terms applying, effectively pricing Irish beef off the shelves and meaning it had to seek other, less lucrative markets. Dairy exports, particularly cheese, and other food exports would also have been hit and lower tariffs would have applied in other sectors such as clothing and some other manufactured products.

Tariffs would have applied on imports from the UK to the Republic as well, pushing up prices on a range of consumer food and household products, prepared foods and meals and meats. Prices may rise in some cases anyway, due to the additional cost of customs procedures which will apply even with a deal.

As the European Parliament will not have time to vote on a deal, the EU member states are likely to agree to provisionally apply it from January 1st. New challenges will still face trading companies in complying with customs requirements, however and this could lead to delays as the new system beds down. There was no announcement of measures to ease the introduction of the new customs system on January 1st and the Irish Farmers Association and business lobby groups have expressed concern about the impact on trade in the early months of 2021.

A Brexit deal – and the appearance of vaccines to combat coronavirus – will mean that the growth estimates behind Budget 2021 will change. The forecasts had been completed on the basis of no vaccines being generally available and no Brexit deal.

However, the possibility of a lengthy lockdown moving into 2021 will act to reduce growth in the early months and lead to significant extra costs supporting businesses and people out of work.

The Government set aside €3.4 billion in the budget in a recovery fund, most of which was not allocated. .While some of this may now be directed to fisheries, the need to direct potentially large amounts to support the beef sector is avoided. Thus more of the cash can go to dealing with the fall-out from the virus.