Profits soar at Pepper on gains made from home loan sale 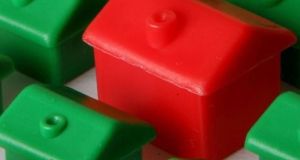 Pepper made an €8.6 million gain arising from the sale of its residential mortgage business last year.

The company said profits before tax jumped to €16.7 million in 2018 from €5.6 million a year earlier. Revenues rose to €42.3 million from €40.6 million. Pepper is a subsidiary of the Australian financial services group now owned by private equity group KKR.

The increase in profits was due to increased interest income, an €8.6 million gain arising from the sale of the residential mortgage business and a €6.7 million dividend payment from its subsidiary company.

Pepper, whose parent employs more than 1,700 people globally, and has in excess of €36 billion in assets under management, entered the Irish residential mortgage market in January 2016. Its decision to dispose of the portfolio last year to Finance Ireland was linked to a wider plan for the group to grow its loan servicing business in Europe.

The group, which first entered the Irish market after acquiring the share capital of GE Capital Woodchester Home Loans in September 2012, continues to market and promote commercial mortgage products under the Pepper Money brand.

Last year it originated €85 million of commercial loans as against €13 million in 2017.

The company’s Irish loan servicing business, Pepper Asset Servicing, recorded a slight reduction in assets under management last year to €15.8 billion from €16.1 billion. While the unit reported lower growth than in previous years, it said it was highly active in the final fourth quarter, adding three new portfolios in a move that boosted assets under management by €2.4 billion.

Total profit for Pepper for the year ending December 2018 was €14.8 million, as against €1.08 million in 2017. Operating profit fell to €701,913 from €2.7 million over the 12 months, due to an increase in administrative expenses arising from a recruitment drive. The company employs about 400 people.

Shareholder funds increased to €53 million last year from €39 million in 2017.

“The positive performance delivered in 2018 reflects the ongoing momentum in our business but also the changing profile of the business as we exited residential lending to focus on developing our loan servicing business and commercial lending,” said Pepper chief executive Cormac Ryan.

“While 2018 was a transitional year, we’ve continued to win significant new servicing mandates totalling in excess of €6 billion over the last 12 months,” he added.

This includes the servicing of more than 6,200 non-performing loans sold by Permanent TSB late last year.

At the end of 2018, Pepper said it serviced more than 8 per cent of the outstanding residential mortgages in the Irish market, the majority of which it said were performing loans.