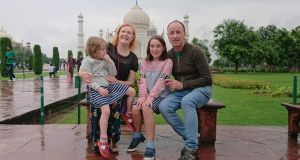 Emer Davis and Sean Brady with their daughters Zaira and Iseult at the Taj Mahal during monsoon season.

Flying from Ireland into India five days before 1.3 billion people went into Covid-19 lockdown might sound like jumping from the frying pan into the fire, but for one Irishman it was the luckiest plane reservation he ever made.

Sean Brady worried about reuniting with his wife and children more than 7,000km away as reports of the coronavirus pandemic were getting worse, and countries began restricting travel and some shutting down borders. If this flight didn’t go, it could be months until he saw his family again.

Brady’s wife, Emer Davis, works in the Irish Embassy in New Delhi, where she is head of the large immigration and visa section. The couple, from Drogheda, Co Louth, have two daughters – Iseult (13) and Zaira (nearly seven), who attend the nearby American Embassy School. The family moved to New Delhi in July 2018 and Davis’s assignment runs until August 2021. Brady works in the National Museum of Ireland’s Collins Barracks in Dublin and regularly flies back and forth.

Brady breathed a sigh of relief when his plane touched down in New Delhi on March 16th for what was initially supposed to be a three-week trip. Just days later, on March 22nd, there was a curfew. Two days later the Indian government imposed a strict curfew and the country went into total lockdown. All air travel and rail was banned, and schools and restaurants shut nationally.

“I was very lucky to arrive when I did because two days later I would not have been able to fly to India,” says Brady. “I arrived at lunchtime and we had a St Patrick’s Day party that evening. Originally it had been planned as a much bigger event but, by that Monday, Emer had scaled it down for only Irish embassy staff and a few close friends. Every other planned event was cancelled.

Children are not allowed out at all on the streets

After St Patrick’s Day, the family had planned to go to Sri Lanka for the girls’ spring break before Brady flew back to Ireland on April 5th. Everything, of course, was cancelled.

“During my first week we were still able to move about, although all the malls had begun to close. The girls were able to walk around the neighbourhood. Zaira was already doing continuous learning from home and Iseult was still attending middle school. We could visit the school cafe, use the school sports fields, the swimming pool, tennis courts and library. There was still somewhere to go and things to do. Then everything changed very quickly," Brady says.

“March 21st was the last time we could visit the school library or use any of the school facilities once the curfew had been announced.”

Since then the children have been unable to leave their apartment, which is in the diplomatic area of New Delhi and a five-minute walk from both the embassy and school.

“Children are not allowed out at all on the streets,” Brady says. “The girls walk on the balcony to get exercise. Our neighbour on the top floor has the roof terrace and allows them to use it during the day. So every afternoon we go up for an hour in temperatures above 35 degrees to play football and games, walk or just sit on the artificial grass and talk.”

Adults are only allowed out for essential shopping. There is no public transport. Some hotel restaurants offer deliveries but these can take several hours. At night the streets are completely empty except for families who defy the curfew by taking forbidden walks around the neighbourhood. In the diplomatic area, Brady says, social distancing is a bit easier as there are small blocks of houses with a small park.

“The only problem for us is the stray dogs and monkeys, which are now taking over the roads at night looking for food," he says. With hardly any workers around, there are not enough scraps left out so they have become more territorial within their patch, Brady says. "It is not advisable to wander off the main road into laneways at night.”

Brady describes some of the dogs as “just young pups, skinny with sad eyes". He says after lazing in the midday sun under the security huts and the empty parks, they gather together at night. "They bare their teeth in defiance so we have to sidestep them, wishing we had carried our umbrella for protection,” Brady says.

“Another day, I watched a monkey scurry up to a fruit seller, snatch a banana from the stall and take cover under a tree. Peeled in one second, he devoured it before his siblings could grab it off him. A family of them held hands as they climbed up the branches and swung onto the open balconies and rooftop terraces, knocking over broken potted plants that had dried from too much sun."

Brady describes the American Embassy School as “more like a university campus and an oasis of calmness compared with the chaotic life outside its walls”. The students come from more than 100 countries; half are from South Korea, the US, Israel, Canada and Japan, as well as India. Currently, there is one other Irish child in the school, whose mother also works in the Irish Embassy.

Brady says parental involvement with the school is very high: voluntary groups from the school even take part in reach-out programmes with the nearby slums, and the students visit these areas to help Indian children with their reading.

Now, on these virtual schooldays, Iseult and Zaira are up at 7am for breakfast and an hour of reading, and then receive instructions on iPads on their lessons and homework, and some live Zoom classes through the day. After lunch they do exercises with Joe Wicks on YouTube and afternoons are partly spent on the roof terrace.

It’s a relief, Brady says, that technology at least allows the girls to keep in contact with friends and family in Ireland. “Watching them converse with each other over a phone, chatting about their day and showing each other their bedrooms and toys is something I could not have experienced as a child. If it wasn’t for technology, this lockdown would be a lot worse.”

Brady doesn’t know when he will return to Ireland – it all depends on when international flights resume and when the National Museum reopens. He's happy to stay as his wife, Davis, who is also a noted poet back home, still goes to the embassy every day.

“At the moment it is good to be here with my family and to support Emer. The children have continuous learning until the end of May but we will keep up some distance learning for the summer because the likelihood is that they will have to remain in India until the new academic year in August starts, even if it’s online. We couldn’t take the chance of the girls going on a repatriation flight to Ireland over the summer months if they could not return to Delhi after the holidays are over,” he says.

This, he adds, is the situation for many families in the school as more than 70 per cent have remained in India. Those families who did leave have no idea when they will be able to return.

“It’s tough on them [the girls] but we have learned to adjust and live a new way," he says. “At the end of the day we are lucky and we are safe and we are together for now – and that is something to be grateful and thankful for.”