ECB rules out backstop funding for Ireland without conditions

Country ‘may find solution on its own,’ says Asmussen 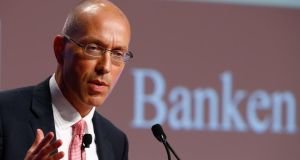 ECB executive board member Jörg Asmussen said yesterday that any further assistance to Ireland, if granted, would come with conditions imposed by the ESM bailout fund. Photograph: Ralph Orlowski/Bloomberg

The European Central Bank has dismissed the idea of no-strings-attached funding to ease Ireland’s return to financial markets.

ECB executive board member Jörg Asmussen said yesterday that any further assistance to Ireland, if granted, would come with conditions imposed by the ESM bailout fund.

“It could well be that the Irish will find a solution on their own,” he told the Börsenzeitung financial daily.

Confirming he had read recent comments by Minister for Finance Michael Noonan about the possibility of a €10 billion precautionary credit line from the bailout fund, Mr Asmussen added: “He knows that a precautionary ESM programme comes with conditions.”

Mr Asmussen said Ireland would not automatically qualify for the ECB’s OMT bond-buying programme – another proposed financial backstop to reassure investors ahead of Ireland’s return to markets.

The ECB official said the rules for activating the as-yet untouched OMT programme were known: a country needs to be an ESM programme country with IMF involvement.

“This can also be a precautionary programme with the possibility of primary market purchases by the ESM,” he said, “but particularly important, and we’ve always repeated this, is that a country under an EFSF or ESM programme has to be in a position to win full access to capital markets.”

The ECB would not accept short-term debt obligations, so-called treasury bills (T-bills) as proof of financing.

Capital markets
“OMT is a finance market instrument, not a replacement for the lack of access to capital markets.”

Asked whether OMT could be employed to assist capital market returns of programme countries, Mr Asmussen said the bank’s governing council would “decide on a case-by-case basis”.

Last week ECB president Mario Draghi said a decision on Ireland’s request would be taken “in due time” and would be decided by euro zone finance ministers.

1 Retailers accused of ‘stealing business’ from rivals by flouting restrictions
2 In praise of Gogglebox Ireland, an essential service in all but name
3 Outgoing Irish a sitting duck for Covid
4 ‘French people are pretty relaxed. They don’t pander to scaremongering or hysteria’
5 Nama grants Ronan four-month extension on €160m glass bottle site deal
6 How long can Government afford to keep State pension age at 66?
7 Liam Neeson among new investors backing €100m Ireland Impact fund
8 ‘Disproportionate’ and ‘devastating’: Business owners on Level 5
9 How to avoid a communication breakdown
10 How to improve ethics at your company
Real news has value SUBSCRIBE