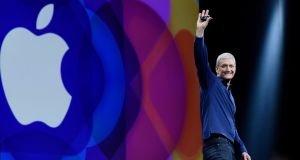 Apple chief executive Tim Cook: The European General Court delivered its ruling on appeals by the company and Ireland to a European Commission decision that it had to pay €13 billion in back taxes. Photograph: David Paul Morris/Bloomberg

Europe’s second-highest court ruled on Wednesday that the Republic did not give Apple illegal state aid, overturning a European Commission decision four years ago that the iPhone maker owed Revenue €13.1 billion in back taxes.

The General Court in Luxembourg ruled that the commission “did not succeed in showing to the requisite legal standard” that Apple received tax advantages from the Republic.

The ruling may still be appealed by the commission before the Court of Justice of the European Union, the EU’s highest court. It could take up to a further three years before there is a final outcome on the case, stemming from the world’s biggest-ever anti-trust decision.

Most of the €14.3 billion collected by the Government in 2018 following directions from the commission, including €1.2 billion of interest, will remain in escrow until a final verdict is delivered.

The ruling marks another setback for European competition commissioner Margrethe Vestager, who has made the tax crackdown a centrepiece of her time in office and said on Wednesday that her team is considering its next step in relation to the case.

The General Court last year overturned her demand for Starbucks to pay up to €30 million in Dutch back taxes. In another case, the court subsequently threw out her ruling against a Belgian tax scheme for 39 multinationals. Still, the Republic’s corporate tax regime remains in focus.

“The verdict [comes] at a sensitive time for Ireland, which has been forced to fight a rearguard action against European efforts to impose different types of sales and digital taxes in recent years,” said Ryan McGrath, a government bonds analyst with Cantor Fitzgerald in Dublin.

The EU plans to proceed next year with planning for a form of digital services tax, mainly aimed at multinational technology companies, if efforts by the Organisation for Economic Cooperation and Development (OECD) to deliver a wider agreement on the issue fail. While almost 140 countries are involved in the OECD process, the United States pulled out of the process last month.

Brussels is also said to be planning to open up a new front to pursue low-tax member states over their advantageous corporate tax regimes. The commission is exploring ways to use an EU legislative clause to propose taxation laws if it finds that competition in the single market is being distorted, the Financial Times reported on Tuesday.

This only requires a qualified majority of EU member states and backing from European Parliament and would get around normal national vetoes on tax matters.

The last Government, then led by Enda Kenny, decided in late 2016 to appeal the Commission’s ruling, casting it as an attack on the Republic’s sovereignty when it comes to taxation, and arguing that the State did not give favourable treatment to Apple and that it does not do tax deals.

Sinn Féin and the Green Party opposed the appeal at the time.

Had Ireland lost its case, a further appeal would have proven politically controversial at a time when the Government faces a budget deficit of as much as €30 billion this year to deal with the economic fallout from the Covid-19 crisis.

“The outcome vindicates Ireland’s adherence, not just to Irish but also European rules, when levying taxation,” said Brian Keegan, director of public policy at Chartered Accountants Ireland. “While the amounts of money are vast and the additional tax ... would be welcome, particularly now as we struggle to pay for the cost of the pandemic, it would have been wrong to claim money that is not rightfully ours.”

The commission set out its main claim in court hearings in Luxembourg last September, alleging that Revenue gave the tech giant an unfair advantage in two “rulings” in 1991 and 2007, which allowed the iPhone and iPad maker to channel most of its European sales through “head office” divisions of two group subsidiaries in Cork, which were non-resident for tax purposes.

These units are known as Apple Sales International (ASI) and Apple Operations Europe (AOE). Only profits allocated to Irish “branches” within those subsidiaries were taxed in the State.

The Government and Apple argued that, because Apple’s products and services are created, designed and engineered in the US, the bulk of the profits of the units are due on the other side of the Atlantic.

However, the commission contended that all the profits of the two subsidiaries were taxable in Ireland, as the “head offices” had no physical presence or employees outside Ireland during the period under investigation, between 2003 and 2014.

The second strand to the commission’s case was that even if it were possible to distinguish between the “Irish branches” and the “head offices” within Apple Sales International and Apple Operations Europe, Revenue did not apply proper arm’s-length principle of transfer pricing when it came to working out what taxable profits could be allocated to the Irish branches.

The General Court said on Wednesday that the commission “incorrectly concluded, in its primary line of reasoning, that the Irish tax authorities granted ASI and AOE an advantage” by not allocating Apple Group intellectual property licences to the Irish branches.

In addition, the court said the commission “did not succeed in demonstrating” in its second strand argument that the method used for allocating taxable profits to the Irish branches was flawed.

“Although the General Court regrets the incomplete and occasionally inconsistent nature of the contested tax rulings, the defects identified by the commission are not, in themselves, sufficient to prove the existence of an advantage for the purposes of [EU rules],” the court said.

“Ireland has always been clear that there was no special treatment provided to the two Apple companies – ASI and AOE,” the Department of Finance said in an initial reaction to the court ruling. “The correct amount of tax was charged.”

Apple, which employs about 6,000 people in Cork, said: “This case was not about how much tax we pay, but where we are required to pay it. We’re proud to be the largest taxpayer in the world as we know the important role tax payments play in society. Apple has paid more than $100 billion in corporate income taxes around the world in the last decade and tens of billions more in other taxes.”

The Government had argued in its appeal that the commission had sought to use and “retrofit” the OECD’s 2010 general guidelines on transfer pricing to build its case around the 1991 and 2007 rulings when they were not written into Irish law.