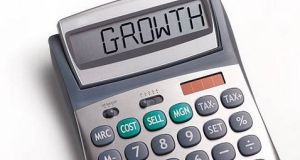 In its latest economic outlook Davy predicts that GDP will grow 5% in 2017, up from a previous forecast of 3.7%. Photograph: Getty Images

Ireland is on course to be the fastest growing economy in the euro zone for a fourth straight year, according to Davy Stockbrokers.

In its latest economic outlook the firm predicts that gross domestic product (GDP) will grow 5 per cent in 2017, up from a previous forecast of 3.7 per cent. This is well ahead of the current consensus forecast for 1.7 per cent growth across the euro area as a whole.

Davy said the softness in some indicators, particularly those relating to the export sector, following last year’s Brexit referendum had “now unwound”, pointing to faster-than-expected growth in early 2017.

It also noted that €20 billion of intellectual property assets imported in the final quarter of 2016 had artificially depressed GDP growth in 2016. However, this would have the opposite impact this year.

Davy also upgraded its growth forecast for consumer spending, the main driver of domestic growth, predicting it would expand 3.4 per cent in 2017, up from 3 per cent in 2016, on foot of further employment gains and wage rises.

Employment is expected to expand by 2.8 per cent in 2017 and 2.3 per cent in 2018, sufficient to push Ireland’s unemployment rate to 5.3 per cent next year, a level which the Economic and Social Research Institute (ESRI) equates to full employment.

Its rosy predictions for the wider economy were, however, undercut by a stark warning about the likely impact of Brexit. It said its “base case” was that a transitional deal would be agreed to avoid the worst-case scenario of a hard Brexit, where World Trade Organisation (WTO) tariffs are imposed in 2019, hurting Irish exports.

However, it cautioned that if this failed to materialise Irish GDP growth would slow sharply, with agriculture, indigenous manufacturers and small- and medium-sized enterprises particularly exposed.

The Department of Finance recently estimated that a hard Brexit could reduce Irish GDP by close to 2 per cent within one to two years of WTO tariffs being imposed.

On the property market, Davy said the announcement of a new Help-to-Buy scheme for first-time buyers and the loosening of the Central Bank’s mortgage lending rules appeared to have added “fresh impetus” to the market.

It highlighted that annual house price inflation in Dublin accelerated from a 2 per cent low in June to 8.3 per cent in February this year.

“The housing market remains exceptionally tight and illiquid,” it said, noting that fewer than 19,500 properties were listed for sale on property website MyHome in early 2017, less than 1 per cent of the State’s entire housing stock of two million homes.

In total there were 47,800 housing market transactions in 2016, comprising just 2.4 per cent of the housing stock.

“Hence we now expect Irish house price inflation to accelerate to 10 per cent growth through 2017, up from our previous forecast of 8 per cent and the 7.9 per cent recorded in 2016.”