Cliff Taylor: Paschal Donohoe has options but faces effects of years of underinvestment 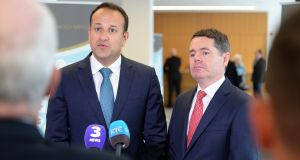 Recent Irish governments have had to grapple with the cost and the fallout of economic failure. Finally, in 2017, we are back to somewhere like we were in 2007, with the budget roughly in balance. But the lost economic decade has taken a toll, and one of the key challenges facing the new Taoiseach and his Minister for Finance is dealing with this.

The crisis is over, but its legacy still haunts our budget policy, notably years of underinvestment that has left big holes in our infrastructure. The Government has options. It has the resources both to boost investment and set up its rainy-day fund, to guard against a future downturn. Its real challenge will be choosing where to spend the money and getting projects up and running.

Goodbody’s chief economist, Dermot O’Leary, ran the numbers to compare 2007 and 2017, and it tells much of the story. General Government spending – the total spent by the exchequer – will be a bit more than €75 billion this year, compared with €70 billion a decade ago.

More spending on our national debt

But the breakdown of the figures tells a different story. Interest spending on servicing our national debt has, predictably, increased – up more than €4 billion. The amount spent on social benefits has similarly increased and is up by €5.6 billion.

On the flip side, capital spending – Government investment in schools, hospitals, roads and the like – is €4 billion lower this year than it was 10 years ago, and it was lower again in the depth of the crisis. With big projects typically taking five to 10 years to come on stream, we now see an infrastructure deficit crashing up against a growing economy and knocking on also to dire social problems in areas such as housing.

The resulting political and economic pressures have led the new combination of Leo Varadkar and Paschal Donohoe to set a somewhat different course for economic policy.

Donohoe, as minister for public spending before the recent change, had already got Cabinet approval to nudge capital spending higher in the years ahead. Now, with control of finance as well, and a new Taoiseach in place, the pedal is to be pushed down even more firmly.

The decision to devote €500m a year to the new rainy-day fund, rather than the €1bn Michael Noonan planned for, will not be a game-changer either way

The Government also has options when it comes to funding, provided economic growth continues at a decent rate. The decision to devote €500 million a year from 2019 to the new rainy-day fund – rather than €1 billion, as the former minister for finance Michael Noonan had planned for – will not be a game-changer either way.

But in its summer economic statement the Government also said it will look at other cash and investment resources at its disposal, notably the Ireland Strategic Investment Fund, which has an €8 billion portfolio, some of which is invested in businesses. But the bulk is still in financial investment. More than €4 billion, for example, is in bonds and cash.

With normal financing routes reopening for businesses, the Government has signalled that it wants to re-examine what to do with this money. The fund’s directors have said that an “element of its resources” could be made available to meet other Government priorities. This means some of it could be used, for example, to start a rainy-day fund and some could be used to boost investment, outside its existing mandate.

The State also has another rainy-day fund, with about €20 billion currently held by the National Treasury Management Agency in cash. Although this figure is currently unusually high, because of a €6 billion bond redemption due in October, the NTMA coffers usually hold more than €10 billion in cash. Together with the liquid money in the Ireland Strategic Investment Fund, this gives the State significant rainy-day firepower, before a cent is ever put into a formal rainy-day fund.

This means cash is available, too, to meet the key goal of boosting investment, with more than €5 billion of State funding to be spent in this area next year, rising to more than €7.8 billion in 2021.

The real challenge is to spend this properly, choosing the right projects and getting the work completed. Skills shortages are already affecting some areas of construction, and the cost of getting projects done is rising. The inevitable planning and legal delays loom.

And there is no shortage of demand on where to spend the cash. Making those choices, avoiding falling victim to a political carve-up, having a proper overview, with cost-benefit parameters set, and finding some way to ensure the whole picture fits together are the priorities. The money is there, but not enough to pay for everything.