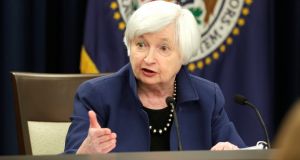 Federal Reserve chairwoman Janet Yellen: Reaction to a 0.25 point interest rate increase in the US shows how a few sets of positive economic figures and some nudging from those in charge can change expectations – dramatically – in a matter of weeks. Photograph: Yuri Gripas/Reuters

There is one lesson for Irish borrowers – and savers – from this week’s increase in US interest rates. It is how quickly expectations in the market can change. Little more than a month ago, the market was not expected to rise this week. By the time the increase came on Wednesday, comments from US Federal Reserve chairwoman Janet Yellen and her colleagues in the interim had prepared the markets and the 0.25 point increase came as no surprise.

But it shows how a few sets of positive economic figures and some nudging from those in charge can change expectations – dramatically – in a matter of weeks.

The Fed cut rates sooner than the European Central Bank (ECB) and has started to increase them well ahead of Europe. For the moment, interest rate markets in Europe are signalling that the ECB will not start to increase interest rates until the second half of 2019. But the euro zone economy is picking up, inflation in on the rise and a significant minority in the markets now expect the ECB to start pushing up interest rates next year.

A few months of positive economic data could quickly turn this positive view into a market consensus. But it is simply too early to call this one, with the outlook now on a knife edge, depending not only on economic performance but also political factors, notably the Brexit negotiations and the French presidential election.

Forecasts are so uncertain because we are emerging from one of the most extraordinary periods in economic history, requiring extraordinary actions from central banks. Fed interest rates stayed at effectively zero for a full seven years, only starting to edge up at the end of 2015.

The ECB was slower to react, but in Europe the key rate has been below 1 per cent since 2012 and are also now fallen to zero. The Fed and the ECB, along with the Bank of England, have also pumped vast wads of money into their economies via the purchase of Government and other bonds – so-called quantitative easing . This is a traditional method used to push cash out into the market, even if the scale of its use in recent years is completely unprecedented.

The fear they were fighting was deflation, a dreaded combination of low growth and low inflation which can feed on itself and condemn an economy to years of inertia. This is why the pick-up in the rate of inflation on both sides of the Atlantic is so crucially important, along with rising employment and stronger growth.

But the economic collapse was unprecedented and the recovery has been slow and stuttering, leading to huge uncertainty on interest rate trends. The Fed increased its key rate by 0.25 points in December 2015 but it was December 2016 before a second increase was announced. This week’s rise was just the third in a decade.

What has now changed is that – for the first time – markets are confidently expecting a succession of further Fed hikes this year and into 2018. The era of super low rates is ever-so-slowly coming to an end. Normal service may soon resume, even if the unpredictable “Trump factor” could still upset US forecasts.

It is not only in the US that economic conditions are improving. Euro zone growth is also recovering and headline inflation is now just below the ECB’s 2 per cent target, even if on-off factors including higher oil prices mean underlying inflation is lower. Fears about China have eased. The initial expected economic hit from Brexit has not materialised, even if huge uncertainties about its impact remain.

Slowly, forecasts are being revised upward in Europe. Senior German central bankers and research institutes, already feeling that the ECB is doing too much to boost the euro zone economy, are starting to mutter even more loudly that ECB policy should be starting to return to normal. And “normal”, sooner or later, means higher interest rates.

“The world economy has certainly been improving of late and if that improvement is sustained, then policy settings will need to adjust accordingly over time,” according to Simon Barry, chief economist at Ulster Bank in Dublin. “Simply put, the more progress that is made in getting economic conditions back to normal, the stronger the case for getting interest rates – and other policy settings – back towards normal levels.”

A few months ago, few expected ECB rates to rise before 2019. Now, as the economic signals pick up, the debate is on. When will the ECB start to phase out its quantitative easing programme? And will it start to increase rates only after this is over – as it had indicated – or before?

Danske chief analyst Jens Peter Sorensen acknowledges that talk of earlier interest rate hikes is gaining momentum, even if Danske are still not buying into it.

“The rise in inflation is temporary and driven by the higher oil price and food prices – so in our view we have seen the peak in inflation for now,” says Sorensen. “We think it is a bit premature to talk about rate hikes – but the market is always ‘right’ – so this theme about hiking rates earlier than expected is gaining a lot of momentum.”

In Dublin, the majority view among analysts remains that it will be 2019 before the ECB moves its key refinancing rate – the one which will kick on automatically to a rise in tracker mortgages. However, there are also dissenters.

“We expect the ECB refinancing rate to remain at zero until the third quarter of 2019,” says Philip O’Sullivan, economist at Investec in Dublin. “We expect the ECB to announce a tapering of its quantitative easing programme by the end of this year. Our view on the timing of an ECB refinancing rate hike chimes with the futures market, which doesn’t see one happening until the second half of 2019.”

Dermot O’Leary, economist at Goodbody, says it is now clear that there will be no further easing in ECB rates and the next move will be an increase. “However, I believe a rate hike is some time away, likely in 2019,” he adds.

For all that, there are supporters of the idea of an earlier move by the ECB and much debate about the sequence of change as it winds down its programme of quantitative easing and starts to move up its various interest rates. European banks are particularly exercised about the negative return they get on short-term deposits, and it is possible that this could be phased out before any rise in the main refinancing interest rate.

Alan McQuaid, economist at Merrion Capital believes that the ECB will move sooner, rather than later. “I think they will start hiking rates in the first half of 2018,” he says.

It is an uncertain outlook for mortgage holders. Approximately 360,000 mortgages in Ireland are on tracker rates and will vary automatically as the ECB moves. Another 300,000 or so are on standard variable rates. These are also likely to edge higher as the ECB moves, though given that they are already higher than the euro zone average, banks will be under pressure to not pass on at least some of any ECB rise. Much will depend on the state of competition in the Irish market when the increase comes.

Savers, meanwhile, may finally start to see deposit rates move from their current historic lows, where average rates on demand deposits are less than 0.1 per cent after Dirt tax. Here, too, competition will play a big part.

O’Leary of Goodbody also warns that, in the years ahead, mortgage holders need to prepare for a return to normality. “Rate hikes are likely to be gradual, but we should certainly be thinking about a ‘normal’ level of rates being in the 3 per cent to 4 per cent range,” he says.

Either way, the peaks in rates on both sides of the Atlantic is likely to be below the 4 per cent plus seen in the previous two economic uplifts. The Fed governors expect US rates to be around 3 per cent by 2019. And Europe is well behind. If the camp that believes ECB rate increases will not start until 2019 are correct, mortgage holders have time to adjust. By the end of that year Investec expects that ECB rates will still be at just 0.5 per cent.

The outlook for Irish borrowers is now on a knife edge. The view that rates will start to increase in 2018 could quickly be bolstered by signs of an euro zone economic uplift. Or victory for Marine Le Pen in France could throw everyone’s calculations out, leading to a new period of uncertainty. Economists are used to dealing with economic uncertainty – but the extra frisson of political upheaval means firm predictions are nearly impossible. But the debate is on and, for the first time, talk of interest rates moving higher is back on the agenda.