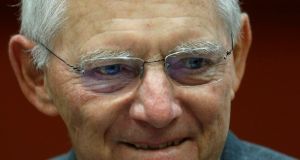 Germany has earned profits of €1.34 billion on its various euro crisis loans to Greece over the last decade, according to official figures. Berlin’s contribution to euro rescue funds for Greece, and direct bilateral loans to Athens, have generated a windfall for federal finance minister Wolfgang Schäuble. His federal finance ministry responded to a parliamentary question posed by the opposition Green Party.

For instance a 2010 loan to Greece by Germany’s state-owned KfW bank of €22.3 billion has earned €393 million so far in interest, after refinancing costs, although only two-thirds of the loan was drawn down.

According to the finance ministry, the Bundesbank earned profits of €952 million since 2015 on on the Securities Market Programme (SMP), a bond-buying programme that ran for two years until 2012. Though the programme is now defunct, the bonds bought continue to generate tidy sums for the European Central Bank: €1.147 billion projected this year and €901 million next year. Based on the ECB capital key, Germany is entitled to about a quarter of that.

German opposition politicians have said it may be legally sound but morally dubious for Berlin to earn money from Greek difficulties.

“The interest profits have to finally be paid to Greece,” said Sven-Christian Kindler of the Green Party. “It’s just not on that Wolfgang Schäuble can reform the German budget with such interest profits.”

The decision is a belated reaction to wrangling over German robot manufacturer Kuka, bought last year by the Chinese company Midea. Another such takeover, of Aachen-based machine company Aixtron, was blocked at the last minute after warnings from the US government that the deal threatened its national security.

Instead of ad-hoc action, the new rules backed by the Berlin cabinet yesterday allow investments to be blocked if they pose a “danger to the public order”.

The new rules are likely to make it difficult for non-EU companies to invest in companies that produce software – or have access to data clouds – that power telecommunications, banks, hospitals and airports.

“We are an open economy but we are not naive,” said Matthias Machnig, state secretary in the economics ministry to the Süddeutsche Zeitung daily. “We know that there is a critical infrastructure [in Germany] that is attractive for investors.”