Industrial production increases by 4.7% in quarter

Manufacturing industries upped production by 22.1% in November compared to October 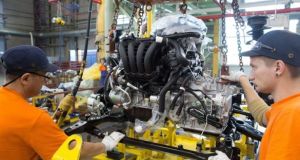 Manufacturing industries increased production by 22.1 per cent in November compared to October.

Industrial production increased by 4.7 per cent for the September-November period compared to the previous quarter, according to the latest figures from the Central Statistics Office.

Manufacturing industries increased production by 22.1 per cent in November compared to October on an unadjusted basis. On an annual basis, production for November was 42.4 per cent greater than in November 2019.

On a rolling quarterly basis, the “modern” sector showed a quarterly increase in seasonally adjusted production of 1.5 per cent and an annual increase of 4.5 per cent. The modern sector is made up of chemicals and pharmaceuticals; computer, electronic, optical and electrical equipment; reproduction of recorded media; and medical and dental instruments and supplies.

In the traditional sector – which includes all other industries – there was a quarterly increase of 4.9 per cent and an annual decrease of 2.7 per cent.

Quarter-on-quarter turnover decreased by 3.3 per cent for September-November compared to the previous three-month period.

On an unadjusted basis, manufacturing industries increased turnover by 23.3 per cent in November compared to October. On an annual basis, turnover for November was 26.5 per cent greater than in November 2019.