US-based fund predicts Irish economy will shrink by 6.8% before rebounding in 2021

The coronavirus pandemic has brought the global economy to its knees and is likely to result in the worst economic downturn since the Great Depression, the Washington-based International Monetary Fund (IMF) has said. 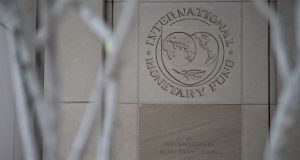 In its first world economic outlook report since the spread of coronavirus, the IMF estimated that global GDP will shrink 3% this year. Photograph: Andrew Harrer/ Bloomberg

The coronavirus pandemic has brought the global economy to its knees and is likely to result in the worst economic downturn since the Great Depression, the International Monetary Fund (IMF) has said.

It also warned that global debt markets may come to a sudden stop, echoing the 2008 credit crunch, if companies become more distressed amid a prolonged recession due to the crisis.

In its latest world economic outlook report, the Washington-based fund says it expects the global economy to “contract sharply” by 3 per cent in 2020 with the euro zone, the epicentre of the pandemic for the past month, experiencing an even sharper 7.5 per cent contraction.

Under its best-case scenario, the world is likely to lose a cumulative $9 trillion (€8.2 trillion) in output over two years – greater than the combined gross domestic product (GDP) of Germany and Japan, Gita Gopinath, the IMF’s chief economist, told a news conference.

The fund’s outlook for Ireland is slightly better, though still grim. It expects the economy to contract by 6.8 per cent this year, less severe than the Central Bank projection for an 8 per cent decline.

The IMF expects the Irish economy to bounce back strongly next year, growing by 6.3 per cent against a euro-zone average of 4.7 per cent.

However, the rapid increase in unemployment here could prove trickier to unwind.

In its report, the IMF says the global economy is “very likely” to experience its worst recession since the Great Depression of the 1930s, which resulted in a devastating and prolonged economic recession across the industrialised world.

“This crisis is like no other. First, the shock is large. The output loss associated with this health emergency and related containment measures likely dwarfs the losses that triggered the global financial crisis,” it says.

“Second, like in a war or a political crisis, there is continued severe uncertainty about the duration and intensity of the shock.”

In its report, the IMF cautions that the “baseline scenario” underpinning its forecasts assumes that the pandemic fades in the second half of 2020 and containment efforts can be gradually unwound, which it admits is by no means certain at this stage.

At the launch of the report, Tobias Adrian, head of the IMF’s monetary and capital markets department, warned of potential crisis in financial markets running in parallel with the economic one.

The greatest risks were in the markets for junk bonds, buyout loans and private debt, which had expanded rapidly since the global financial crisis to a total of $9 trillion (€8.2 trillion) with the help of a general weakening of lending standards and borrowers’ creditworthiness, he said.

While global stock markets and other risky assets have rallied in recent weeks from a sudden slump in March, helped as central banks slashed rates and announced more than $6 trillion of stimulus efforts, analysts are unlikely to have fully reflected the extent of expected economic deterioration in their earnings forecasts for companies, according to the IMF.

“Strains in some markets have abated somewhat, and risk asset prices have recovered a portion of their earlier declines,” said Mr Adrian. “Sentiment continues to be fragile, however. Global financial conditions remain much tighter compared with the beginning of the year.”

1 Michael Smurfit: ‘I asked Trump to invite me to the White House for my 80th birthday’
2 ‘I’m so lucky to be in the Caribbean – a million miles from Derry Girls’
3 Small businesses are cannon fodder in zealous anti-virus experiment
4 Tax and the Pandemic Unemployment Payment: Your questions answered
5 ‘The recovery needs to be a full-scale economic renewal’
6 Ryanair expects air fares to fall when flights take off again
7 ‘Never mind GDP; the most fundamental job of any leader is to keep his people alive’
8 Coronavirus: Technopath offers employers not-for-profit antibody tests
9 Joint accounts: if one of us dies, can the other access the money?
10 Revenue fears fraudsters tapped bank details of 3,000 taxpayers
Real news has value SUBSCRIBE