How your country’s history affects the way you think

The experience of German integration holds lessons for Ireland 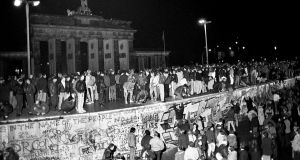 East and west German citizens celebrate as they climb the Berlin wall at the Brandenburg gate after the opening of the east German border was announced. Photograph: Fabrizio Bensch/ Reuters 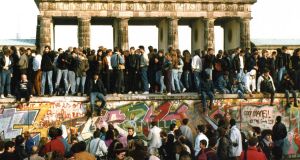 Germans from east and west stand on the Berlin Wall in front of the Brandenburg Gate, a day after the wall opened. File photograph: AP

Thirty years ago the Berlin Wall fell, heralding a dramatic change in regime in the formerly communist world. Within a year, the political and economic institutions were revolutionised in east Germany and right across eastern Europe. Most of the states involved are now EU members.

Recent studies have looked at how these countries have changed over the intervening period. There has been rapid convergence in living standards between the “new” EU members and the EU 15, though there is still some way to go. Within Germany there was also considerable convergence, though progress has slowed in recent years. However, the research also shows longer lasting effects of living under communism on preferences and expectations that affect social and political development.

The findings show that the economic differences between east and west Germany were not just due to 40 years of communism. In pre-war Germany, what became east Germany had a higher share of manufacturing employment, a higher share of the population was “working class” and the communist party had a higher vote share in 1930. These historic differences contributed to the observed differences between east and west when the wall fell in November 1989.

We know that the tax and welfare system plays a hugely important role in redistributing income, nowhere more so than in the Republic. While across Europe, redistribution is strongly favoured by the public, this preference is higher in eastern regions. In east Germany, this preference is matched by a greater popular acceptance of the importance of paying your share of taxation. However, redistribution systems through tax and welfare are less developed in eastern EU than in western EU members. Our own experience in Ireland was that it took decades for a more comprehensive welfare system to evolve, from the initial creation of a modern social insurance system in 1953.

Overall, there are long-lasting effects of communism on public preferences and attitudes, despite the fairly rapid adjustment of institutions. This is manifested in different political outlooks, with the ultra nationalist AfD enjoying considerably more support in eastern Germany. Studies show that the long-lasting effects of communism mean that east Germans are significantly less trusting towards other people than west Germans. In behavioural studies, east Germans show consistently less willingness to co-operate, with no convergence in the 20 years after reunification. This cultural factor may help explain a greater resistance in the eastern part of the country to immigration.

Within Germany the observed differences in preferences and attitudes may have been affected by huge population movements. Before the Berlin Wall was erected in 1961, 20 per cent of the 18 million living in east Germany left for west Germany. They tended to be better educated than remainers. It is likely that those who left had stronger views on the importance of democracy, and of the free market, than those who remained. By contrast, half a million people, including Angela Merkel’s family, chose to move from the west to the east in those years. So differential movements of population prior to 1961 may have contributed to divergences in public attitudes today between eastern and western Germany. Huge emigration from east to west since the fall of the Wall, also predominantly by the better-educated, may have added to today’s divergence of outlook as between the two regions.

Historically, women in the eastern EU did relatively better in the workforce than their western counterparts, although in some aspects there is now closer convergence between the regions. Eastern women used to have higher workforce participation rates, and a lower gender pay gap, but these have now broadly equalised.

Women in the east of the EU are still more likely to hold a full-time job. Eastern girls still score better at maths than their western counterparts. However, young western Germans have a much more positive attitude towards women’s employment, a change from their parents’ generation.

The experience of German unification suggests that history casts a long shadow. Different attitudes and outlooks persist in spite of economic and political integration. As John Hume put it, unifying people is different, and more important, than unifying territory. There are lessons for Ireland about the challenge of forging a shared outlook on this island from a fractured past.