Sub-zero rates on the cards, but only after Covid-19 crisis has passed 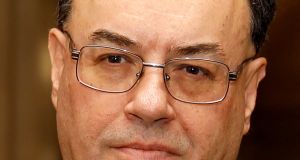 The Bank of England has raised the prospect of cutting interest rates below zero – after the coronavirus crisis has passed.

The idea that sub-zero rates might be more effective in a post-pandemic revival rather than the current slump is a counterintuitive one, but there is a precedent, in the view of Bank of England governor Andrew Bailey.

The European Central Bank (ECB) implemented negative rates in June 2014, a year after the euro zone exited a double-dip recession.

A “conclusion we tend to be drawing from other experiences is that the negative rates and their effectiveness depends on what point in the cycle you use them,” he said on Thursday after he and his colleagues kept their benchmark at 0.1 per cent.

“If you see what the ECB have done in their analysis that probably they are more effective in an established upswing than they are in a difficult downswing.”

The ECB’s aim was to revive dangerously low inflation through higher asset prices and a weaker exchange rate. It wasn’t enough – it had to be followed up months later with large-scale quantitative easing – though it continued to cut rates and still defends them.

Investors are betting that the Bank of England will eventually take the step in response to the deepest recession in centuries. Markets predict negative rates will arrive sometime around September 2021.

The central bank published a summary of its review of the measure on Thursday, running through the longstanding pros and cons. It noted that the policy can support the economy by lifting asset prices, lowering market interest rates, and boosting exports through a weaker currency.

“Banks’ balance sheets will be negatively affected by the period of severe economic disruption arising from Covid-19. And they have an important role to play in helping the UK economy recover by providing finance for individuals and companies. As a result, negative policy rates at this time could be less effective as a tool to stimulate the economy.”

At the same time, profit margins at banks tend to get squeezed because they have to pay a fee on the deposits they hold at the central bank, and they can’t easily pass that onto ordinary customers.

The conclusion – so far – is that the impact on banks is especially crucial now as they prepare for a mountain of bad loans. Bond-buying and guidance on the direction of policy remain preferable for the present.

Bailey appeared to rule out a compromise step that some economists have been predicting. The Bank of England could in theory cut the cost of its term funding scheme – cheap long-term loans to banks that pass the cash onto companies and households – below zero while setting the benchmark rate positive or at zero.

That would be akin to an ECB measure which gives lenders access to funding cheaper than the central bank’s official policy rate. But Bailey seemed to think not.

“No, I don’t see a negative term funding scheme was being priced up in that sense we tended to always use it as a step that goes alongside movements and rates,” he said.

“I would envisage that that would be the consideration we would have at the time and I wouldn’t envisage a different sequence.”

1 Bank of Ireland sees more than 1,400 staff apply for redundancy
2 Air travel never going ‘back to way it was’
3 Operation Transformation doesn’t need to lose stones and pounds, says regulator
4 Should I switch bank now with Ulster Bank at risk of closing?
5 J&J launches first phase 3 trial of single-dose Covid-19 vaccine
6 Coronavirus vaccine: 15 billion doses needed to inoculate the planet
7 Huawei’s Irish arm reports rise in revenues, warns of Covid impact
8 South Dublin land at €19m has scope for up to 500 homes
9 Why working in an office beats living at work
10 How to bring a hotel group through a pandemic
Real news has value SUBSCRIBE