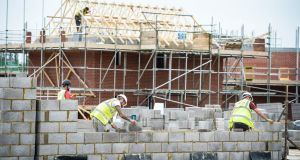 According to Goodbody’s latest housebuilding tracker, there was a 77 per cent rise in the number of new homes built during the first 11 months of 2017.

Housebuilding activity in Ireland accelerated significantly last year but official figures are still greatly overstating the level of supply, potentially by up to 100 per cent, according to Goodbody Stockbrokers.

The group’s latest housebuilding tracker, which is based on building energy ratings, suggests there were 8,659 new homes built in the first 11 months of last year, 77 per cent up on the previous year.

Despite the increase, the figure is significantly lower than the Government’s official tally for period, which was 17,309, and is way below the 30,000-35,000 level, which experts say is necessary to meet demand.

Measuring housingbuilding in Ireland since the crash has proved controversial with experts claiming the department’s official figures bear little relationship to the number of new homes being built.

This is because electricity connections overstate the level of new builds, they say, reflecting the fact that new connections can be triggered by work to existing buildings, or by formerly vacant units coming back on stream.

“We believe that alternative housebuilding indicators continue to overstate supply with the electricity connections data suggesting a much higher level of output,” Goodbody said.

The broker’s latest report suggests 1,191 new housing units were completed in November – a rise of 53 per cent on the same month of last year.

This was the highest monthly reading since the series began in December 2013 and represents the third consecutive month that completions have exceeded 1,000 units.

The monthly indicator suggests Dublin continues to dominate new building activity, accounting for half of the new homes built. The Greater Dublin area, which includes Kildare, Meath and Wicklow, accounted for 73 per cent of new housebuilding activity.

This compares to the 47 per cent share of new housebuilding suggested by the electricity connections data.

However, it noted that this was “largely a function of growth coming off quite a low base”.

1 Can we finally say farewell to the scourge of hot-desking?
2 Why gift a son now if it eats into his tax-free inheritance threshold?
3 Big Four told to outline plans for audit split in UK by October
4 Amazon.com shares top $3,000 for the first time
5 Mortgage arrears: Prevention is definitely better than cure
6 Flights abroad ban could last all summer
7 Ballymore acquires London shopping centre for €83m
8 Chris Johns: Economic self-harm is the root of populism
9 Government to avoid ‘cliff-edge’ on Covid-19 payment changes
10 Global markets surge after positive economic news in Far East
Real news has value SUBSCRIBE