Cliff Taylor: The country faces huge challenges and targets it will struggle to meet 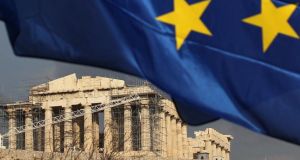 “Greece really needs a strong and relatively stable international backdrop, because it needs economic growth, at an estimated 1.4 per cent last year and 2 per cent this year, to take hold.” Photograph: Oli Scarff/Getty Images

It is a bit much to see the usual suspects in the European institutions queue up to congratulate Greece this week on exiting its bailout. European Council president Donald Tusk tweeted: “You did it!” He went on to offer “congratulations” to Greece and its people who, “with huge efforts and European solidarity, seized the day”.

There are two problems with this. The first is the enormous cost to Greece of the adjustment – amounting to 25 per cent of GDP and leaving an unemployment rate at 20 per cent. Youth unemployment is twice that level. If this was a successful adjustment, you would hate to see a botched one.

The second is that Greece has been left with a debt burden and financial targets which look unsustainable. Its debt-to-GDP ratio, at not far off 180 per cent of GDP, is off the charts, even after allowing for the unusual nature of its debt pile.

The financial crisis hasn’t shown us a perfect way to manage an economic collapse – probably because there isn’t one – with ideological viewpoints on both sides trying to use it to prove their case. The case studies and debates about austerity and the protection of banks during the crisis will continue for years to come.

While Ireland managed to bounce back after a bout of austerity and emerge from a bailout after three years, it took Greece eight years and three programmes. Part of this was because Greece entered the crisis in a much more vulnerable situation. A history of budget mismangement and borrowing meant it entered the crisis with a debt-to-GDP ratio touching 100 per cent, compared with a pre-crisis debt-to-GDP ratio of about 25 per cent here.

The dynamics of this – the real problem of lowering high debt levels once they soar way over 100 per cent – continues to hamstring Greece today and will for many years to come. Like Ireland, Greece had a banking crisis but also an old-fashioned hole in its budget.

Even in hindsight, laying out a “better” approach for handling the Greek crisis is not straightforward, though some things seem clear. There are real questions about the speed and extent of the early cuts in spending and tax increases. Given the extent of the crisis, there was never going to be an easy way, but the front-loading of austerity after the 2010 bailout and the difficulty and slow progress in pushing reforms through – and the inevitable time lag before they took effect – contributed to an extraordinary economic collapse and huge cuts in wages and living standards.

Meanwhile, debt relief from private banks was not forthcoming until 2011 – when €100 billion was written off. A recent extension of the official European Union bailout loans, while helpful, still leaves too high a debt pile in place. Debt relief has been a case of too little, too late.

A different kind of mistake was made after the 2015 election and the coming to power of Syriza and prime minister Alexis Tsipras, who on Tuesday referred to Greece’s bailout odyssey. The lengthy stand-off with Europe and the resulting fears of Greece crashing out of the euro zone – Grexit – undermined efforts at restoring confidence and racked up a large economic cost.

Crucially, this delayed Greece’s efforts to escape from the bailout. Despite all the austerity, the Greek economy had been showing some signs of life. Greece had even managed to raise some funds from the market in 2014. But any hope of progress was put off by what followed and the real fears that Greece would be pushed out of the euro zone.

Looking back, the timing of Ireland’s exit from the bailout could hardly have been better. As we headed into 2014, we could hardly have had a better wind behind us, with global interest rates on the floor, international growth heading upwards and the European Central Bank set to unveil, a year later, a massive programme of government bond buying.

Conditions are okay right now for Greece. But the economic growth cycle is way more advanced, US interest rates have increased and euro-zone rates will follow. Uncertainties in Italy or Turkey could hit confidence and there are threats of trade wars.

This may make it more challenging as Greece tries to edge its way back into borrowing on the markets. But more importantly, Greece really needs a strong and relatively stable international backdrop, because it needs economic growth, at an estimated 1.4 per cent last year and 2 per cent this year, to take hold. Otherwise it has no chance of meeting the financial targets it has agreed with its official lenders.

These are that it maintain a budget surplus – before debt repayments – of 3.5 per cent of GDP until 2022 and high surpluses for years thereafter. Even with a fair wind, these seem to leave very little room for manoeuvre, as even the International Monetary Fund – not known as an opponent of austerity – has said.

More debt relief will be needed, but Europe just won’t admit this up front, or rather seems politically incapable of doing so. The political narrative in northern Europe will not allow it. Even though any argument there may have been for Greece not getting debt relief until it “paid the price” is now well and truly redundant, relief is still granted slowly and grudgingly.

Meanwhile, Greece itself faces huge reform challenges, not least in dealing with the non-performing loans held by its banks. The country has made progress, restoring some order to its budget and its balance of payments. But it has come at a huge cost. And a huge reform programme remains.

Ireland’s various economic indicators are now generally back in line with or above pre-crash levels. We have benefited from more than three years of solid economic momentum. It will be a much longer road for Greece. We can only hope that the comment by EU economic commissioner Pierre Muscovici that the “worst is over” for Greece proves correct.