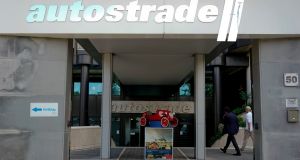 Italy’s sovereign debt may swell by as much as €9.4 billion if the government goes ahead with plans to nationalise the toll roads run by Atlantia’s unit Autostrade per l’Italia.

An early termination of Autostrade’s contract to operate about 3,000km of Italian toll roads would force the state to take over the company’s existing liabilities, according to a clause in the bond documentation.

Autostrade reported €9.4 billion of net debt last year in its financial report. A large bill for the government could prompt another clash with the European Union, which is already concerned about the impact the populists’ fiscal and spending plans could have on Italy’s budget. “If the language above does hold weight, it arguably gives the Italian government an incentive not to revoke the licence,” CreditSights analysts including Jassie Singh, Andrew Moulder, Mariya Nurgaziyeva wrote in a research note Monday.

They were referring to both the liability risk and the possibility that the government may be stuck paying early contract-termination compensation, which would further weigh on state coffers.

Italian deputy premier Luigi Di Maio, leader of the anti-establishment Five Star Movement, and transport minister Danilo Toninelli have been threatening Atlantia with nationalisation of Italian toll roads after a bridge collapsed in Genoa on August 14th, killing 43 people. They were privatised in the late 1990s. Mr Di Maio’s coalition partners from the League party have been less sanguine. Cabinet undersecretary Giancarlo Giorgetti said Monday that he “is not convinced that state management of highways would be more efficient”.

The country’s populist government is struggling to form a united front in its response to last week’s tragedy and the ensuing public anger.

While Di Maio and the anti-establishment Five Star have been quick to criticise the private operator, deputy premier Matteo Salvini, whose League derives some of its support from businesses in the north, suggested EU budget rules hindered Italy’s ability to spend on transport projects. So far no government official has explained how the nationalisation would take place and at what cost to a country that is supposed to be reducing its debt levels.

Yield spreads for Italy’s sovereign debt over Germany’s touched recent highs last week, after Mr Di Maio said the government may have to start questioning “external constraints” on spending for infrastructure. Mr Di Maio has downplayed concerns, saying he doesn’t see any reason to pay compensation for early termination of the concession contract if the company was negligent. Also, investors in Autostrade’s €8 billion of bonds would have the option to switch their holdings to those of the parent company, Atlantia, which could reduce some of the liabilities passed on to the government. – Bloomberg