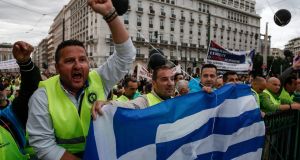 Greece is calling on its creditors to strike a deal that would allow it to honour billions of euro in debt repayments, arguing that it has upheld its side of the bargain by pushing through painful tax and pension reforms.

IMF officials and euro zone finance ministers will hold talks on Monday intended to pave the way for Athens’s next tranche of bailout aid so that it can make more than €7 billion of debt repayments in July.

“Greece has done its bit, most would say more than its bit,” Euclid Tsakalotos, Greece’s minister for finance, told the Financial Times.

He added that a deal would open the door to the country’s participation in the European Central Bank’s economic stimulus programme and provide “the signal to the markets that so many investors have been waiting for”.

The aid is dependent on bringing the IMF into the bailout programme as a financial partner. But the fund has clashed with Greece’s euro zone creditors and, in particular, Germany, warning repeatedly that the country’s debt is unsustainable.

In response to the fund’s concerns, Greece has adopted tax, pension and labour market reforms that have brought protesters on to the streets in force. Last week the government was rocked by a 24-hour general strike, with further strikes either planned or under way in the shipping industry and local government.

But Wolfgang Schäuble, the minister for finance for Germany, which holds a general election in September and whose public is increasingly resistant to further aid for Athens, argues that the need for further debt relief has yet to be established.

The European Commission has warned that the delays are wreaking economic damage on the country. Last week, it slashed its growth forecasts for Greece saying that the uncertainty is already acting as a brake on investment.

“It is clear that the Greek authorities are working hard to keep their end of the bargain,” he said. “I hope that all Greece’s partners will now keep theirs.”

EU officials warn that the Greek programme will run into logistical problems if a deal is not reached soon, especially given that approval procedures will be needed in some national parliaments to sign off the release of bailout aid.

One senior EU official puts the prospect of an accord on Monday at “50-50”.

According to people briefed on the talks, the sides have made progress in recent days, with a tentative agreement that Greece’s current target of a primary surplus of 3.5 per cent of gross domestic product should be maintained for a further four years after 2018.

The main forms of debt relief envisaged by euro zone governments are maturity extensions for older bailout loans, and deferral of interest payments. Governments have firmly ruled out any cut in what Greece owes, while interest-rate caps also pose political and practical obstacles.

The talks have become snarled up on competing IMF and European predictions for Greece’s budget surpluses and growth stretching decades into the future. One person involved said planning debt relief based on the most pessimistic IMF forecasts would lead to Greece not paying off some bailout debts until after 2100, an outcome no one is seriously considering.