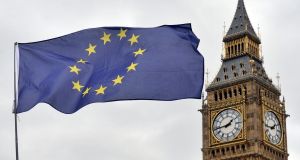 The size of Britain’s exit bill, and which types of negotiations can begin before it has been agreed, has been a source of debate for weeks. Photograph: Victoria Jones/PA Wire

The UK will quit talks on leaving the European Union unless the bloc drops its demands for a divorce payment as high as €100 billion, British Brexit secretary David Davis has said.

Britain’s negotiations would otherwise be plunged into “chaos”, Mr Davis said in a weekend interview, and even a £1 billion settlement would be “a lot of money”.

The size of Britain’s exit bill, and which types of negotiations can begin before it has been agreed, has been a source of debate for weeks. European Commission president Jean-Claude Juncker has said the UK will have to pay some £50 billion (€58.2bn), while Luxembourg’s prime minister Xavier Bettel has signalled a figure between €40 billion and €60 billion.

The Financial Times estimated the cost could balloon to €100 billion, while a study by the Institute of Chartered Accountants in England and Wales put the cost at as low as £5 billion (€5.8bn).

British prime minister Theresa May’s government has said it will meet its commitments to the EU, but has questioned how Brussels officials reached their preliminary estimates.

“We don’t need to just look like we can walk away, we need to be able to walk away,” Mr Davis said. “Under the circumstances, if that was necessary we would be in a position to do it.”

Mr Davis also said the negotiations, which are expected to begin on June 19th, would be “fairly turbulent”, and he would reject any blueprint for discussions that required the issues of the divorce bill, EU citizens’ rights and Northern Ireland’s Border to be solved before talks could begin on future trade. “The first crisis or argument is going to be over sequencing,” he said.

Ms May also weighed in on the Brexit bill, saying in a separate interview with the Sunday Telegraph that “money paid in the past” by the UK into joint EU projects and the European Investment Bank ought to be taken account of in the final sum. “There is much debate about what the UK’s obligations might be or, indeed, what our rights might be. We make it clear that we would look at those, both rights and obligations.” – Bloomberg