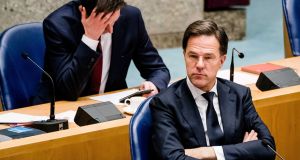 Critics have accused the Netherlands of jeopardising the future of the European Union with its strident opposition to joint debt issuance in response to appeals for solidarity to deal with the fallout from the pandemic.

Dutch finance minister Wopke Hoekstra wrote that issuing joint debt in the form of so-called coronabonds or eurobonds risked undermining “incentives for sensible policy”: the so-called moral “hazard argument” familiar from the last euro-zone crisis that countries with more debt should essentially learn from their mistakes.

Mr Hoekstra also suggested that Brussels should “investigate” why economies did not have enough firepower to fight a downtown, a perceived dig at Italy that reportedly infuriated fellow finance ministers in a video conference last week.

“That statement is repugnant in the framework of the European Union. And that’s exactly the right expression for it: repugnant,” said Portuguese prime minister António Costa declared. “No one has any more time to hear Dutch finance ministers as we heard in 2008, 2009, 2010 and so forth.”

Portugal, Ireland, Italy and Spain were among nine euro-zone countries that had called for common debt issuance to ensure “stable long-term financing for the policies required to counter the damages caused by this pandemic” last week.

Stark rejection of the idea by the government of prime minister Mark Rutte triggered an avalanche of criticism.

“We’re not asking for extra money from the Netherlands. The idea that the Netherlands pays for everyone is a lie. It’s not true,” former Italian prime minister Enrico Letta told Dutch newspaper Volkskrant.

“I do indeed think that the European Union is at great risk. Deadly risk in fact.”

Italian mayors and regional governors bought a page in Frankfurter Allgemeine Zeitung newspaper to appeal to Germany for solidarity. The letter noted that German debt had been written off after the second World War and accused the Netherlands of effectively being a tax haven “that has been subtracting resources from all big European countries for years”.

The Dutch position also attracted significant opposition within the Netherlands.

Sixty Dutch economists signed a letter criticising the Hague. Former central banker Nout Wellink spoke in favour of eurobonds and warned that if Italy and Greece got caught in a debt spiral it could tear the monetary union apart.

As the Hague sought to quell the storm of criticism, Mr Hoekstra gave an interview to Dutch broadcaster RTL in which he admitted showing “too little compassion”.

“We phrased it in such a way that it led to resistance,” he said. “If you’re getting as much flak as we are, you obviously haven’t done it right.”