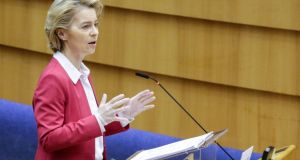 The European Commission wants the power to tap international markets to raise €100 billion in loans to help Italy, Spain and other countries worst affected by coronavirus, as the EU seeks to counter criticism that it has run out of tools to fight the pandemic.

According to a draft proposal seen by the Financial Times, the European Commission will on Thursday approve an instrument known as “SURE” that will provide back-to-back loans to economies that face a “sudden and severe” rise in spending on short-time working schemes, such as those modelled on Germany’s Kurzarbeit system.

By opting to raise money on the open markets, the commission hopes to defuse tensions among member states about the need for so-called coronabonds – joint debt instruments that have the backing of nine euro zone countries, including France, Italy and Spain, but which are fiercely opposed by Germany and the Netherlands. It will instead ask governments to provide guarantees to back loans issued by Brussels.

“In order to provide the affected member states with sufficient financial means to enable them to deal with the impact of the Covid-19 outbreak on their labour market, the union’s borrowing and lending activities under SURE should be sufficiently large,” said the draft. “The loans issued by the union should therefore be financed by recourse to international capital markets.”

Ursula von der Leyen, the commission president, said on Wednesday that the temporary scheme was an example of “European solidarity in action”.

“The idea is simple – if there are no orders and companies run out of work because of a temporary external shock, like corona, they should not lay off their workers,” she said.

EU countries are on course to see rocketing unemployment claims as a result of the crisis, with self-employed workers who have less income support being worst hit. Ms von der Leyen said schemes such as Kurzarbeit had proven their worth in the aftermath of the 2008 financial crash, helping “millions of people to stay in their jobs”.

The commission has been under pressure to provide new ways to ramp up the EU’s joint fiscal response after governments clashed over coronabonds and on how to deploy the bloc’s bailout fund, known as the European Stability Mechanism, to issue loans to stricken economies.

Under the new plan, governments would provide guarantees to support Brussels’ borrowing. The draft proposal said the new instruments would only take effect once all member states had put up guarantees collectively worth €25 billion. The size of each country’s guarantee would be proportional to the size of its economy. The UK would not participate in the scheme. The draft calls on member states to provide loan guarantees that are “revocable, unconditional and on demand”.

The commission, along with other EU institutions such as the European Investment Bank and the ESM, has the power to borrow on the open markets as long as its lending is guaranteed by member states. Brussels also has the power to use unallocated money in the EU budget to raise loans.

“Those guarantees are necessary to enable the union to grant loans of a sufficient order of magnitude to member states, to labour market policies which are under the greatest strain,” according to the proposal. To avoid the scheme becoming depleted, the three biggest beneficiaries of it would not, cumulatively, be allowed to have access to more than €60 billion of loans.

The commission hopes the proposal will win the support of EU finance ministers when they meet next Tuesday.

The scheme will involve countries applying for loans from Brussels when they are “seriously threatened with a severe economic disturbance” resulting from the pandemic. Brussels will review the need to sustain the fund after a year and decide whether “exceptional” circumstances still hold.

This short-term work initiative is part of a set of proposals that will be discussed by the eurogroup next week, including the granting of precautionary credit lines from the ESM. Ministers will also discuss plans to bolster the EIB’s role in fighting the crisis. On Wednesday, French finance minister Bruno Le Maire said he favoured the creation of a time-limited common rescue fund, alongside measures already offered or being negotiated by other EU or euro zone institutions. – Copyright The Financial Times Limited 2020