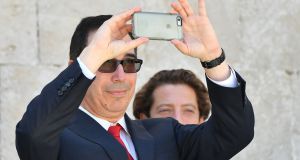 US Treasury secretary Steven Mnuchin at the end of the G7 summit of finance ministers and central bank governors in Bari, Italy on Saturday. Photograph: AFP/Getty Images

Financial officials from some of the world’s largest trading powers have pinned their hopes of a breakthrough in economic diplomacy on meetings with US President Donald Trump later this year, after reaching a deadlock in trade talks over the weekend.

Finance ministers and central bank governors from the Group of Seven kept their watered-down promise to promote free trade after a two-day meeting in Bari, as the US administration’s reluctance to commit to a full-throated defence of global trade remained firm.

America’s reluctance to condemn protectionism has upended global diplomacy. But while Mr Trump campaigned on a platform to boost exports and impose sanctions on some importers, some officials in Bari said they had become increasingly optimistic that Mr Trump could make a commitment to avoid protectionism.

Though a deal on issues such as trade and climate change may continue to elude the G7 and G20, Mr Trump has recently appeared to tone down his rhetoric. An official in Bari said: “Trump has said trade agreements need to be reciprocal. They do, and that’s not always the case at the moment.”

While relations between Steven Mnuchin, US Treasury secretary, and his counterparts are believed to be getting warmer, the US Treasury is reluctant to sign off on a stronger commitment in a policy domain that it believes is the responsibility of heads of state. With Mr Trump expected to travel to Italy later this month to meet with other G7 heads of state and also due to attend the G20 leaders’ summit in Hamburg in July, officials hope more progress can be made.

Michel Sapin, France’s minister for finance, said the other delegations had put pressure on the US to not turn its back on global economic diplomacy.

“All the six others . . . said explicitly, and sometimes very directly, to the representatives of the US administration that it is absolutely necessary to continue with the same spirit of international co-operation,” Sapin was quoted by Reuters as saying.

Mr Mnuchin said he believed his counterparts from other countries were becoming more comfortable with the new administration “now they have spent time with me and have listened to the president and listen to what the message on what the economic agenda is”. The Treasury secretary said the administration’s commitment to economic growth of 3 per cent would be good for the US and for the global economy.

The Italian delegation, which is responsible for all of this year’s G7 meetings including a summit of global leaders in Sicily in May, had sought to avoid a repeat of the scrap that broke out between the US delegation and everyone else in the room – bar Japan – at the G20 meeting held between finance ministers and central bank governors in Baden-Baden in March.

A confrontation over the language in the G20 communique of 2016 to “avoid protectionism in all its forms” led to an embarrassing step-down for hosts Germany.

The issue of protectionism is expected to feature in discussions in Sicily, which take place in the town of Taormina.

Mr Mnuchin presented a more conciliatory picture of discussions at the Bari meetings, citing the US’s new trade deal with China and its willingness to commit to the North American Free Trade Agreement (Nafta) as evidence that the administration was not anti-free trade – so long as it judged the conditions applied by other nations to be “fair”.

Mr Mnuchin said the opening-up of the market for beef sales to China was a “huge deal” for the administration and for US farmers. He also said the administration had held “preliminary but productive discussions” with the Canadian and Mexican governments on Nafta. It was possible to negotiate a deal that was a “win-win for all three countries”.

Instead of trade, the talks – held in a 12th-century Norman castle – focused on economic growth and inclusion. Angus Deaton, an economics Nobel Prize-winner, told delegates at a closed-door event held on Friday morning that inequality in the US was reducing the life expectancy of the white middle class. Mr Mnuchin did not attend the talk, according to two people familiar with the matter.

There were also discussions on cybercrime, financial regulation and international taxation.

An extended communique, a feature of the Italian G7 presidency, acknowledged that nations should do more to promote economic inclusion.

“We recognise that the global economy is facing a prolonged period of modest growth, and high and rising inequalities, notably within many countries and affecting in particular middle- and low-income earners,” the communique said. “We will work to lift actual and potential growth, while ensuring that the fruits of economic growth are shared more widely.”