French budget may be based on overly optimistic projections 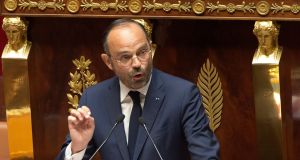 France’s 2019 budget will be based on an economic growth forecast of 1.7 per cent and a public deficit target that may be hard to reach, French prime minister Édouard Philippe said in an interview with Journal du Dimanche as he outlined job cuts and lower public spending.

“We stand by our policy to transform [France] and to rein in spending, while bolstering spending that will support economic activity. It’s a break with policies that were a blind increase in all benefits,” Philippe told the Sunday newspaper. “I’m always careful with forecasts,” he added, as he gave the first details of next year’s budget bill to be unveiled at the end of September and presented to the European Commission next month.

The French premier didn’t say if the government would be able to reach the 2.3 per cent deficit target next year that was forecast a year ago in its five-year budget plan. “If growth slows down, there will naturally be an impact. But we will remain committed to our goals,” he said.

Priorities set in the next budget will matter for the euro zone’s second-largest economy, which is not growing as fast as President Emmanuel Macron has predicted. Consumer spending, the motor of the French economy, is forecast to grow 0.2 per cent in the second quarter – trailing both Germany and the European Union. And more seriously for Macron, the unemployment rate is still just 0.3 per cent lower than when he took office.

Macron’s policies, which have been criticised for favouring the wealthy, won’t cut down on minimum poverty benefits, the minister said, while showing that his government will no longer fund benefits for everyone.

The government is studying a gradual cut to unemployment benefit as part of its future reform of the system. It’s also possible it may force employers to foot part of the bill for sick days, a change to the current system, which costs the state €10 billion annually, he said. He reiterated the government’s plan to build a new pensions system for public sector workers. – Bloomberg

1 Opioid executive admits to ‘no morals’ ahead of prison term
2 Are there annual limits on inheritances or gifts to a child?
3 Who are Ireland’s 17 billionaires?
4 South Dublin Credit Union members urged to borrow more to ensure survival
5 Fallon & Byrne founders McHugh and Byrne exit group
6 American YouTubers embrace the crisp sandwich
7 Ryanair wants Irish courts to block Skyscanner from selling its flights
8 NI businesses fear burden of post-Brexit red tape on goods transport
9 Real price of cheap credit? Unaffordable homes
10 ‘If you don’t like challenges, you should not be in the airline business’
Real news has value SUBSCRIBE