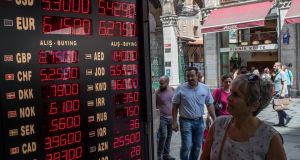 The Turkish lira fell to an all-time low of 5.4941 against the US dollar on Thursday. Photograph: Sedat Suna/EPA

The Turkish lira dropped to a new low against the dollar, losing 4 per cent on Thursday despite government promises of a new economic plan, as pressure mounted on Ankara to reassure investors and resolve an escalating dispute with the US.

After a Turkish delegation to Washington failed to show progress towards the lifting of US sanctions, the currency fell to an all-time low of 5.4941 Turkish lira against the US dollar. It has lost 31 per cent since the start of the year, including a decline of 7.6 per cent in the past six trading days.

Ankara said finance minister Berat Albayrak would announce a “new economic model” on Friday and suggested that the government would seek to cool the economy to address investors’ concerns about unbalanced growth and excessive dependency on short-term funds from abroad.

The statement failed to reassure markets, with the sell-off resuming after the finance ministry made its announcement.

The onslaught on the lira comes after years in which the economy of the strategically vital Nato state has prospered, partly due to ultra-loose monetary policy in the US and Europe, which encouraged investors to seek higher returns in Turkey and other emerging markets.

But the US and the euro zone are now reining in their monetary policy, and economists have signalled unease at an increase in Turkish companies’ debt. Many governments are alarmed at what they regard as the increasingly arbitrary rule of Recep Tayyip Erdogan, re-elected with widely expanded presidential powers in June.

An ABN Amro report on Thursday said investors were worried Turkey would not be able to finance its $218 billion external financing requirement – which includes funds needed to maintain Turkish companies’ debt as well as the country’s hefty current account deficit.

The report added that the base-case scenario remained that Turkey would raise sufficient funds, but that “rumours about possible capital controls on forex transfers and IMF assistance have further fuelled stress in the foreign exchange market”.

In an emailed statement, the finance ministry said: “Contrary to the speculative statements being made in the market about our banks and our companies, our regulatory institutions do not see a problem posed by the exchange rate or liquidity risks.”

It added that it planned to hold the budget deficit this year to less than 2 per cent of gross domestic product and that it expected growth next year to be between 3 per cent and 4 per cent, less than its previous forecast of 5.5 per cent growth for both this year and the next.

However, investors have also signalled deep concern about the stewardship of the economy under Mr Erdogan and Mr Albayrak, his son-in-law, and the consequences of the rift with the Trump administration.

Aaron Stein, a Turkey expert at the Atlantic Council, said that at meetings at the state department the US had given the Turkish delegation an ultimatum to release Andrew Brunson, a pastor jailed by Turkey who is at the heart of the two countries’ dispute. “The US position is quite clear – there is no more dealmaking,” said Mr Stein.

Turkish media reported that the delegation had returned to Ankara on Thursday and that details of its discussions would only be made public once the group had briefed Mr Erdogan.

US sanctions, against Turkey’s justice and interior ministers, remain in place - a highly unusual step by Washington against a Nato ally.

Soner Cagaptay, a Turkey expert at the Washington Institute of Near East Policy, added that John Sullivan, deputy secretary of state, had told Turkish officials that Ankara had until Wednesday next week to release Mr Brunson.

Meanwhile the Russian rouble touched a two-year low in the wake of the Trump administration’s decision to add more sanctions against Moscow over a nerve agent attack on a former Russian spy, which took place in the UK in April.

The market reaction was less drastic than the backlash after US sanctions against Russia announced in April, which threatened severe damage to several large Russian companies. But Washington’s latest step reinforced fears of continuing escalation.

Last week, Russian investors initially dismissed a draft Bill proposed in the US Senate for extremely wide-ranging sanctions, including measures against Russian sovereign debt, arguing that it was unlikely to be approved.

But the publication of the draft Bill’s full details in the Russian media this week spooked investors and the latest sanctions move may be perceived as a signal that Washington should not be underestimated. Among the Russian entities that could then be targeted is Aeroflot, the airline, which could face a ban on flights to the US.

The measures announced by the US on Wednesday will be applied from August 22nd and would block Russian state imports worth hundreds of millions of dollars. – Copyright The Financial Times Limited 2018