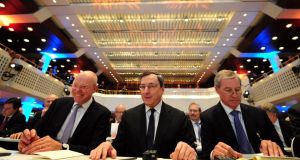 The European Central Bank is considering a new long-term liquidity operation (LTRO) available only to banks that agree to use the funding to lend to businesses, a German newspaper reported today, citing sources.

ECB president Mario Draghi and other governing council members have repeatedly mentioned the option of conducting more liquidity operations, or LTROs, to help the fragile euro zone economy and ensure the flow of credit to the private sector.

The ECB extended more than €1 trillion of cheap three-year loans to banks through two long-term refinancing operations in late 2011 and early 2012.

But this time, an option under consideration is that the banks would have access to funding via the LTRO only if they agree to pass on the money in loans to industrial, retail and services businesses, Sueddeutsche Zeitung reported on Wednesday.

The new LTRO could also run for only nine or 12 months, the paper said. A new LTRO is just one possibility being considered by the ECB as it mulls fresh measures to support the economy after this month’s decision to cut its main interest rate to a record low 0.25 per cent.

A Reuters poll of money market traders said such an operation could happen in the first quarter of 2014.

Governing Council member Jens Weidmann said earlier this month the ECB must ensure its lending operations do not become too generous.