GDP slumps at a quarterly rate of 2% 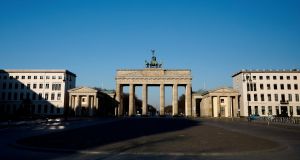 A deserted Brandenburg Gate in Berlin.

Euro zone business activity has crumbled in March as the coronavirus pandemic sweeping across Europe and the world wreaks havoc and shops, restaurants and offices pull down the shutters, a survey showed on Tuesday.

IHS Markit’s Euro Zone Composite Flash Purchasing Managers’ Index (PMI), seen as a good gauge of economic health, plummeted to a record low of 31.4 this month from February’s 51.6, by far its biggest one-month fall since the survey began in mid-1998.

That reading was below all forecasts in a Reuters poll which had a median prediction of 38.8.

“Business activity across the euro zone collapsed in March to an extent far exceeding that seen even at the height of the global financial crisis,” said Chris Williamson, chief business economist at IHS Markit.

“Steep downturns were seen in France, Germany and across the rest of the euro area as governments took increasingly tough measures to contain the spread of the coronavirus.”

All subindexes in the survey came in under the 50 mark separating growth from contraction, with new business hit particularly hard – that index sank to a record low of 29.5 from 51.2.

“The March PMI is indicative of GDP slumping at a quarterly rate of around 2 per cent, and clearly there’s scope for the downturn to intensify further,” Mr Williamson said.

Activity in the bloc’s dominant services industry contracted at the steepest rate in the survey’s more than two-decade history. Its PMI nose-dived to 28.4 from 52.6, below all forecasts in the Reuters poll.

Firms turned to cutting prices for the first time in over three years and optimism tumbled to a survey low. The business expectations index stood at 34.8 compared with last month’s 61.3.

Factories were less badly impacted, with the manufacturing PMI dropping to 44.8 from 49.2 - its lowest since July, 2012 but above expectations in the Reuters poll for 39.0.

An index measuring output which feeds in to the composite PMI dropped to 39.5 from 48.7, a level not seen since April, 2009. Factories across the single-currency bloc cut staff, reduced raw material stocks and completed backlogs of work as demand tanked.

1 Italy threatens Ryanair with flight ban for alleged Covid-19 violations
2 BofI to cut 1,400 jobs as Covid-19 drives €937m loans charge
3 Sacrificing pubs for schools: Ireland’s latest Covid trade-off
4 Ryanair and State agree accelerated hearing of challenge to travel restrictions
5 Food traceability company Identigen acquired by MSD
6 Why Irish households are not, after all, among the best off in the EU
7 Web Summit claims its first event to be held remotely a big success
8 Coronavirus punches €8.3bn hole in public finances
9 So you want to invest in the stock market: what will it cost?
10 Quintain to seek permission for 1,000 homes at Cherrywood
Real news has value SUBSCRIBE