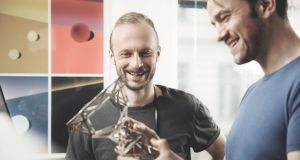 When Germany announced a massive package of measures on Monday to cushion the devastating effects of coronavirus on Europe’s largest economy, Stephen Molloy was watching closely.

His company imports goods it has manufactured in the coronavirus hotspots of Italy and China. Business orders have evaporated, as has footfall in its Berlin store.

Among the measures to kick in next month are one-off liquidity payments for small companies worth €50 billion. Payments of €9,000 and €15,000 will be available for companies with up to five and 10 employees respectively.

People who do lose their jobs will have simplified procedures to access unemployment payments.

With six people on the payroll, emergency measures have allowed Fundamental Berlin – which designs gifts and accessories – avoid redundancies for the foreseeable future.

Under the so-called “Kurzarbeit” rules, Mr Molloy, an architect and designer, can cut salaries and wage costs in his Berlin company by half while the federal government makes up 60 per cent of the shortfall. Workers don’t end up on the street, retain up to three-quarters of their income and can apply for the income shortfall from the local labour office.

“It’s a no-brainer that benefits everyone,” said Mr Molloy. “The taxpayer is spared the full dole costs; there’s less disruption for staff and the company.”

After years of fiscal prudence and balanced budgets, the Berlin cabinet on Monday rushed through a supplementary budget of emergency measures worth €156 billion.

Federal finance minister Olaf Scholz, holding up to the camera a thick pile of papers, said the emergency measures – the largest such package in Germany’s post-war history – demonstrated Berlin’s determination to use “all we have” to limit the fallout of the looming economic collapse.

“That’s a very big package with a lot of measures ... and we can hang on for a long time,” said Mr Scholz to reporters in Berlin. “Now we’re benefitting from years of solid budgetary policies. With a debt ratio down to 60 per cent of economic performance we can throw our entire collective power into the ring.”

Under the new “Kurzarbeit” rules people who, because of school closures, have no other option but to stay home with children under 13 will be entitled to 67 per cent of their lost income, initially for six weeks, to a maximum of €2,016 a month.

Germany’s state-owned bank KfW has begun an emergency programme of its own, offering low-interest loans for companies struggling to secure credit from private banks.

Struggling large companies with turnover above €50 million can apply to a new economic stabilisation fund with €400 billion available in loans and guarantees. As well as €100 billion to recapitalise companies, the federal government may take an equity state if the company is viewed as of strategic importance.

“We will scale these interventions in such a way that we intervene as little as possible in markets, and maintain private initiatives as far as possibl.”