Two-thirds of businesses back trading at normal capacity 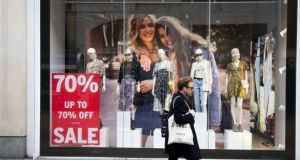 Some 60 per cent of enterprises expressed confidence in having the financial resources to continue trading for longer than six months.

Businesses appear to be bouncing back amid the coronavirus pandemic, with new figures showing that 63.3 per cent of enterprises are now trading at normal capacity.

However, close to half of all enterprises fear another lockdown, with lower consumer confidence and staff wellbeing also cited as big concerns among members of the business community.

The latest Covid-29 impact report from the Central Statistics Office shows that 96.3 per cent of enterprises surveyed were trading in some capacity in the four-week period to August 23rd. Some 2.5 per cent had ceased trading temporarily while 1.3 per cent had closed down.

Turnover was exceeding operating costs for 56.4 per cent of enterprises, but just over half of businesses said they had lower than normal revenues for the period.

Over three-quarters of enterprises in the wholesale and retail sector were back trading as normal, while 50.8 per cent of businesses in construction were also back to regular levels. In addition, more than six in ten so-called micro enterprises were trading at normal capacity.

Some 59.3 per cent of exporters said they were not affected by the Covid-19 crisis in the four weeks under review.

The latest report shows that some 7 per cent of staff returned to their workplace during the four weeks to August 23rd.

Office-based enterprises had an average of 57.7 per cent of staff working remotely at the end of August. Almost a quarter of all businesses said they plan to make remote working a permanent fixture in some capacity. But almost a third have no plans to offer it on a long-term basis.

Businesses spent an average of 4.4 per cent of expenditure on Covid measures in the four weeks to August 23rd.

Some 60 per cent of enterprises expressed confidence in having the financial resources to continue trading for longer than six months, but 5 per cent fear not being able to trade beyond another month.

Just under half of the companies surveyed said they had availed of Government supports in the four weeks under review.