Objections from Germany held up agreement 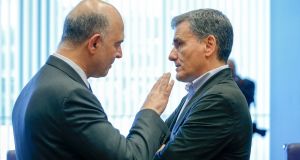 Eurozone finance ministers late on Thursday night approved an historic package allowing Greece to exit in August from its third bailout programme, an end to an eight-year era of financial rescue programmes . The agreement came after six hours of difficult talks held up by a German minister under domestic pressure to oppose any deal.

Greece has endured significant pain since the first bailout in 2010, with a decline of over 25 per cent in its GDP and swingeing cuts in the public service and social programmes. Twice, it nearly crashed out of the euro.

Meeting in Luxembourg the Eurogroup approved the complex package package, that will involve involve 10-year debt maturity and debt payment extensions on some €100 billion of bailout loans and a final €15 billion programme loan from the European Stability Mechanism, the EU’s crisis management tool. Ministers believe the measures will be sufficient to convince money markets of the sustainability of the country’s debt reduction programme.

Although the country’s growth rate has picked up and it is now running a small government surplus, its debt currently amounts to 180 per cent of GDP, a millstone on prospects of recovery.

Greece yesterday signalled that it had undertaken the “88 prior actions” on which the final phase of the adjustment package is conditional. These range from public sector reform to introduction of a land registry system, pension and welfare reforms and to the introduction of a new tax collection system.

Greece is emerging from its third bailout, having received to date since 2010 some €273 billion from various rescue funds, including the European Stability Mechanism and its predecessor the EFSF, and the International Monetary Fund.

The latter pulled out of funding the €86 billion third programme because it viewed the extent of debt relief promised by the EU as insufficient to guarantee that Greece would not be overburdened and unable to pay it down.

The IMF’s verdict on the closure, if agreed, of the third programme – and the decision not to create a fourth – is expected within days and is seen as crucial to reassuring the markets and to ensuring Greek bond yields do not make any malign prognosis come true.

The credibility of a sustainable repayment programme is the whole rationale for the package, which does not involve any cash write-down of the Greek debt, or “haircuts”, but will see a smoothing out of Greece’s repayment schedule over the next three decades.

Repayments will become more manageable as Greece’s debt to GDP ratio should fall by some 25 percentage points by 2060.

Part of the market reassurance will be achieved by continuing a rigorous quarterly inspection regime – “enhanced surveillance” – more severe than those imposed on previous programme-exiting countries, and with further debt relief measures made conditional on further progress.

Greece would have to commit to keeping a primary surplus in the budget balance before debt servicing costs at 3.5 per cent of GDP until 2022 and not accumulate new arrears, and to the full implementation of previously agreed “actions”.

But the prospect that Tsipras may be ousted by looming elections, or feel tempted to break some of the rules for electoral reasons, once Greece is no longer in the programme in August, and when there will be a small fiscal window, remains a cause of some concern. In particular they will closely watch to see if hated pension reforms are reversed.

Having embarked on difficult reforms he will be expected to see them through.

Ministers were last night continuing to work on a package of monetary and banking union reforms for the summit next week.

1 MSD buys Takeda biologics plant in Dunboyne
2 Scars from the crash give Irish banks 2.6 billion reasons for Covid caution
3 ‘Saudi Arabia is where the opportunities will happen in future’
4 Ten of the most mysterious aircraft disappearances
5 Trump signs executive orders banning TikTok and WeChat
6 Irish tourism must also help itself to survive the pandemic
7 What will the office market look like after the great remote working experiment?
8 Ireland property rush risks repeat of crisis
9 How to . . . keep your kids safe playing Fortnite
10 TikTok to invest $500m in data centre and create ‘hundreds of jobs’
Real news has value SUBSCRIBE