EU ready to open talks with US to solve trade row 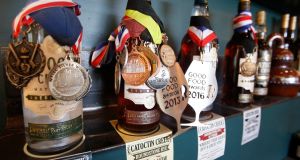 The EU has signalled that it plans to impose retaliatory duties on $3.3 billion in American products from bourbon whiskey to Harley-Davidson motorcycles.

The European Union will introduce new tariffs against selected US products from Friday, but is ready to engage with the United States to solve a trade row triggered by Washington’s decision to impose metal tariffs, EU trade commissioner Cecilia Malmstrom said.

“We are always open to talk with the US. The whole EU is based on the idea that we talk,” she told a seminar on Thursday. She described the tariffs as “illegal” as they contravened World Trade Organisation (WTO) rules.

She also said the WTO needs rules to address China’s subsidies and dumping of its goods in markets.

Brussels has confirmed that its retaliation measures against Donald Trump’s steel and aluminium tariffs will take effect on Friday, targeting some €2.8 billion of US products.

The EU’s hit list slaps 25 per cent tariffs on dozens of US products ranging from orange juice to whiskey and pleasure boats.

The bloc has previously signalled that it plans to impose retaliatory duties on $3.3 billion in American products from Harley-Davidson motorcycles to Levi Strauss jeans as well as bourbon whiskey.

The EU also plans to take a case at the WTO against the US import restrictions. Malmstrom said that throughout negotiations stretching over the past months, the US had tried to use the threat of trade restrictions “as leverage to obtain concessions from the EU”. “This is not the way we do business, and certainly not between long-standing partners, friends and allies.”

The move is part of the EU’s response to Mr Trump’s decision to declare steel and aluminium imports into the US market to be a national security risk, and to hit them with punitive duties.

“Anyone who thinks the economy is being wrecked doesn’t know what they’re talking about,” Mr Ross said on Thursday, saying the news reports on the Trump administration have been negative and played up troubles of smaller companies.

He was responding to a question about Federal Reserve chairman Jerome Powell’s comment earlier this week that trade spats may weigh on growth. “Changes in trade policy could cause us to have to question the outlook,” Mr Powell said at conference in Portugal. “For the first time, we’re hearing about decisions to postpone investment, postpone hiring.”

Mr Ross said the US had the upper hand on trade tensions with China and could pursue more tariffs than it already had. “If it really does get to be a big war, we have many more bullets than any of these other countries,” he said.

Tariffs on metal imports enacted on national security concerns are straining US ties with allies from the EU to Canada and Mexico. Other countries have become “spoiled” after taking advantage of free markets in the US while erecting their own trade barriers, Mr Ross said.

“That game is over,” he said. “We’re going to fix it by making it more painful for those countries to do bad practices than to do the right thing, which is to lower the trade barriers and lower their tariffs.” – Bloomberg and Reuters