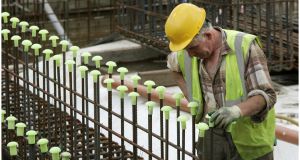 The Central Statistics Office’s latest Labour Force Survey, the most accurate indicator of employment trends, suggested that the participation rate among potential workers here rose slightly to 62 per cent in the first quarter of 2019.

The percentage of “prime-age” workers employed in the Republic is now higher than at any other time, a testament to the current strength of the labour market.

The share of workers aged 25-54 classified as employed – a measure known as the employment-to-population (Epop) ratio – rose to nearly 80 per cent in the first quarter of 2019.

This was higher than the 78.7 per cent recorded in the first quarter of 2007 when employment here was boosted by a surge in construction.

The Epop measure differs from the traditional labour force participation rate, which takes in a broader section of potential workers.

However with many young people opting to stay on in education, it is increasingly used to gauge the recovery in employment since the crash.

Working people between the ages 25 to 54 are typically referred to as “prime-age” workers, meaning most are old enough to be finished formal education but are too young to be retired.

Irish Fiscal Advisory Council chairman Séamus Coffey recently told the Oireachtas Committee on Budgetary Oversight the economy had recovered from a deep crisis and was now operating near capacity. “ This is most visible in the labour market with the unemployment rate falling to about 4.5 per cent,” he said, noting the percentage of the population employed in prime age groups was now above its pre-crisis peak.

The Republic’s headline unemployment rate, which climbed to nearly 16 per cent at the height of the financial crisis, fell to 4.4 per cent last month, approximately half the euro area average.

With headline growth warped by the actions of multinationals, employment has long been viewed as the best lens through which to view the strength of recovery here.

The Central Statistics Office’s latest Labour Force Survey, the most accurate indicator of employment trends, suggested the participation rate among potential workers here rose slightly to 62 per cent in the first quarter of 2019.

However, this is still below the rate recorded at the height of the boom and below the average for the European Union.

The rapid recovery in employment since 2013 has also coincided with a rise in more precarious forms of work linked to the so-called gig economy.

Volvo to sell electric cars only by 2030, company says 07:50
Dalata posts loss of €112m due to Covid hit as Pat McCann to step down as CEO 07:49
Flutter’s revenues rise but profits down due to charge related to Stars deal 07:32
Bank branch closures, Dublin gains from Brexit, and independent living options 06:30
Investor seeks winding up of Irish firm linked to German property venture 06:00